Toys In The Attic.

Freethinkers Anonymous > The Weekly Essay > Toys In The Attic.

My aunt could have been called a hypochondriac, but that’s a word people use lightly. Munchausen syndrome would be the clinical term. She lived with my grandparents even as an adult. My grandfather had heart disease, and some of my earliest memories are of going to the hospital to visit him. Or, when I was very young, standing outside in the hospital parking lot and waving to him in the window of his room because small children weren’t allowed in.

Whenever he was in the hospital my aunt would feign an illness and check herself into a different hospital and force my grandmother to choose where to spend her time.

My aunt and I were never close, although another early memory is of her picking me up and swinging me around. She was smiling and her teeth looked huge. But it was a happy moment. She was happy to be holding me and I was happy to be held.

She made ceramics. Half of the downstairs basement of my grandparents’ house had been turned into a ceramic studio where she poured clay into molds, baked items in the kiln, and taught classes. I think for a long time she did a pretty good business. There were also ceramics studios around town, and I remember being taken to these too. She worked at these places, as well as out of the basement.

The other half of the basement was my grandfather’s workshop where he made grandfather clocks, but that’s another story.

My grandmother was overly accommodating. When my grandfather died she and another aunt who also lived with my grandparents sold the house where they’d lived and moved into a condo because it’s what my aunt wanted. She was giving up her basement, but part of the money from the sale of the house would fund a bigger ceramics business. We went to the condo for dinner occasionally. Once I heard her having a conversation with someone in the kitchen. I thought she was on the phone. I went in and the phone was still hanging on the wall. She was on the other side of the room.

As I got older my aunt’s behavior became more erratic. When I was eighteen the ceramic studio she’d opened with money from the sale of my grandparents’ house went bankrupt. She had a breakdown in the parking lot and started threatening to kill people. The police took her away. She would spend some time in a psychiatric hospital after that.

I don’t know if she was close to anyone, but, aside from that memory of being swung, there were the lamps she made when I was young. As a kid I was obsessed with Star Wars. I know this isn’t unusual, but none of my friends had an aunt who could make Star Wars ceramic pieces. She made me three lamps: R2D2, with lights that glowed all over, which is why he served as a nightlight for many years, Yoda, and Darth Vader. The first two were hand-painted. Darth Vader was dipped in a black glaze that would turn very dark green over the years. My parents may have asked for these lamps, but I think my aunt’s willingness to make them was a connection between us. Maybe she knew that we shared artistic impulses. I would sit in her basement studio playing with clay, scraping the edges of molded pieces before firing, and sometimes being allowed to use ceramic paint to make pictures on scrap wood. Other than my aunt and my grandmother I probably spent more time in that basement than anyone else.

I now take pottery classes, and the smell of wet clay brings up deep memories–happy ones, like the first time I tried barbecue potato chips while hiding under a table, or sitting and quietly molding figures out of scrap ceramic clay. My aunt fired these for me, but because they were solid my figures tended to explode in the kiln. My grandfather would give me pieces of scrap wood, and my aunt would let me use her ceramic paints to make pictures.

My aunt pushed my grandmother around and even abused her, but my grandmother tolerated it. The clinical term would be co-dependent. Because of that and the way she treated other family members I have a lot of anger toward her, but it’s complicated. I admire her devotion to ceramics; it was what she wanted to do. She was selfish, pushy, and mistreated anyone who got in her way, but if she’d been famous for her ceramics critics and fans alike would have taken that as part of the territory. A lot of artists are loved for their work but hated for how they treated others. It may seem goofy to put my aunt in such rarefied company, but would you feel the same way about the sculptures of Michelangelo if you knew him personally? Or the music of Mozart. Keep filling in the blanks. I’ve read too many biographies to say I really admire any artist no matter how much I love what they’ve left behind. It’s not easy to unravel. Yes, I know, we’re all human and all have feet of clay, but if someone mistreats those closest to them, or is just a horrible person generally, does the fact that they’ve created something beautiful cancel that out? Or are we just more inclined to give them a free pass? And there’s also a statute of limitations. People can enjoy Charles Dickens without caring how he treated his wife because, well, that was a long time ago.

I’d been keeping the lamps in the attic for decades. Finally in a spring cleaning project my wife brought them down and I decided to sell them. It was a decision I’d made a long time ago and had been putting off. I had a bunch of other Star Wars toys, but I wondered if the lamps, being unique, would be more or less likely to be bought by collectors. 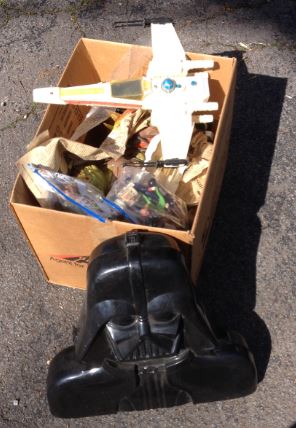 I wanted to get rid of my collection all at once, so I took it to a store that buys and sells toys, comic books, memorabilia. I dropped everything at the front counter and hung around while some guys looked through it.

After an hour the guy who’d taken the stuff from me in the first place told me what they were willing to pay for it. Then he said, “About the lamps…those are AWESOME. Where did you get those?”

I told him all he needed to know, and I felt a kind of pride in saying it. “I had an aunt who made them for me.”