It’s pretty frustrating that Netflix has just announced a whole new cast of The Crown but is holding off on when the new season will be available—for now they’re just saying 2019—but it made me look back at my favorite episode so far—episode 1, season 9, the one called “Assassins”. I’ve read a little bit about art history—just a few dozen books or so, and taken some classes, but I’d never heard of Graham Sutherland, the artist who painted Churchill’s portrait, a portrait Churchill hated, and which was ultimately destroyed. When Churchill called it “a remarkable example of modern art” he meant that as an insult and the audience laughed.

The episode—spoiler alert—shows Mrs. Churchill burning the portrait herself in broad daylight, with Winston himself as a witness, which is what she claimed happened. It wasn’t until 2015 that it was finally revealed that the portrait, which was supposed to hang in Westminster Abbey, was kept in a cellar for years. Then, in the middle of the night, Mrs. Churchill’s secretary Grace Hamblin and her brother took the painting to the brother’s house and burned it there.

So the story as told in The Crown episode is sort of true and sort of not true. That’s interesting because, as Graham Sutherland himself said in 1944,

I feel that an artist’s business is to find an equivalent to the things which give him is idea, an equivalent which derives its life from being a ‘work of art’ rather than a ‘work of nature’…A metamorphosis has to take place.

Here’s a good example of that: Sutherland’s 1975 work Cathedral Of Rocks: 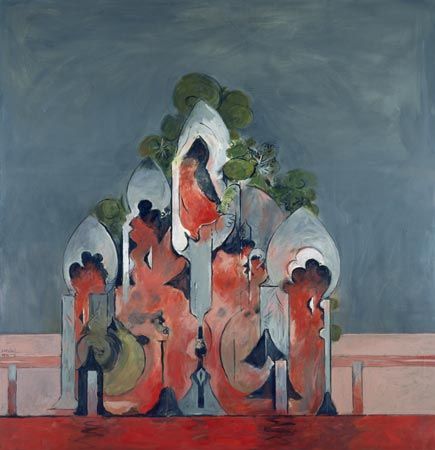 And here’s a photo of the rocks which inspired that painting:

At the time Sutherland painted Churchill’s portrait he was highly respected in Britain but his reputation diminished, not so much over the portrait but because of his decision to live part of the year in the south of France, although he became highly respected—and well paid—in Italy, where they know a thing or two about painting. British critics raised their opinion of him a little when he started painting regularly in Wales, drawing inspiration from the landscape and painting pictures like the one above and his 1978 Thicket With Self Portrait. It’s good to see him get some attention again because his paintings are remarkable examples of modern art—and I mean that as a compliment.