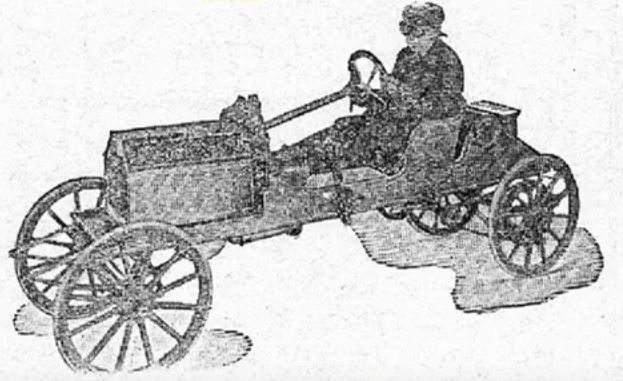 There’s a story about a country farmer who’s never seen or heard of a car and when one drives past his farm he runs and gets his shotgun and fires at it several times. The driver jumps out and runs off into the woods. The car, still running, rumbles off down the road. The farmer’s wife comes out and says, “Well, did you kill it?” The farmer says, “No, but I made it let go of that poor feller it had a hold of.” Maybe it’s just a story, or maybe it’s based on a real event. I had a distant relative named Uncle Rupert who was known for shooting at almost anything that came onto his property–squirrels, deer, encyclopedia salesmen, endangered birds–although he never, as far as I know, shot at a car. He did, during World War II, try to drive to Europe only to turn back when he realized it was full of foreigners, but that’s another story.
I thought about that story the other day when I heard about people in Phoenix, Arizona, violently attacking self-driving cars, including at least one person who fired a gun at one, not realizing there was a passenger in there and that a self-driving car may not be as quick as the older models to let go of whomever it’s got a hold of.
Anyway it got me thinking about the major cultural shifts that self-driving cars will bring, and I do think they’re coming. The recent developments of self-driving vehicles may not be the nail in the coffin of the traditional automobile but I think the undertaker’s making measurements. And as a modern mode of transportation the automobile has had a profound cultural impact in its time and the self-driving car doesn’t represent that big a change. It’s merely the next stage of a gradual evolution. Over the 20th century the automobile changed from a novelty to a necessity, from a short-range way of getting around to a device that can carry a person hundreds of miles. The cell phone has made it possible to reach a person even if they’re driving, and GPS devices make it almost impossible, or at least really difficult to get lost, unless you’re out of signal range, and it’s increasingly hard to find a place where there isn’t a signal. The days of unfolding a giant map and trying to figure out if you should have made that left turn at Albuquerque are gone. It’s hard to predict what changes self-driving cars will bring but, among other things, the driver’s license will no longer be a rite of passage. Kids will no longer need their parents to shuttle them around, not when the car that carries them to soccer practice can drive itself. I’d like to think the drive to and from work would be a nice chance to grab a quick nap but for most people it’ll probably be work time, which gives a whole new meaning to telecommuting.
It was that last thought that made me realize I was contemplating all this on the bus and that, aside from removing the driver and being a little more convenient, or a lot more convenient, driverless cars won’t be that much different from public transportation, which has me already looking to the horizon to wonder what the next big advance will be.
I hope it’s that we can drive to Europe.