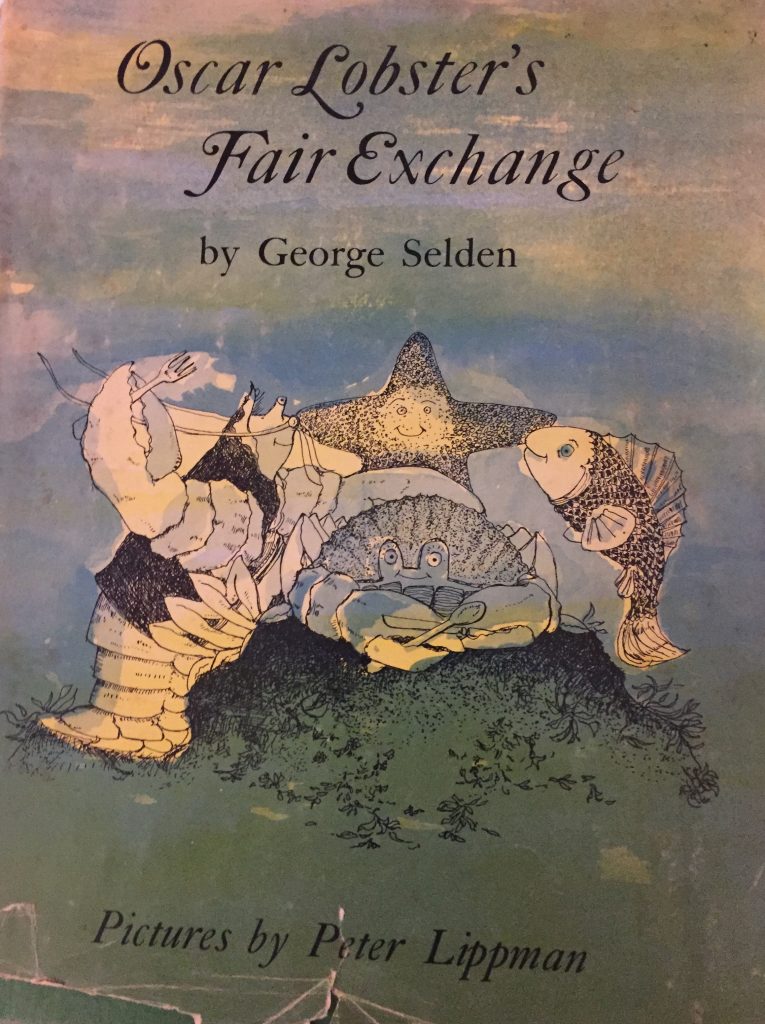 Even though shorelines around the United States are reopening my own vacation plans have been put on hold so I thought I’d take a bibliographic beach tour. After all my favorite place to read is next to the ocean or a lake—or any body of water, which has gotten me some funny looks at the swimming pool, but that’s another story. And Oscar Lobster’s Fair Exchange by George Selden ties in with my postponed plans to visit my parents in Florida. After all it was a book my mother gave me when I was a kid and wanted to be a marine biologist. Or thought I did. Science and the arts aren’t mutually exclusive—there have been scientists who were writers and vice versa, but I eventually realized I wanted to take more of a poetic view of nature. I think Selden’s book tapped into that with lines like, “There was no sound except the gentle ‘shhh’ of the water as it warned the world to be still.”

That’s from just a few pages in as Peter Starfish climbs up onto Turtle Rock, a spot just off the shore of Long Island Sound, where various sea creatures gather at night. And it’s where he meets Oscar Lobster, and Oscar’s friend Hector the Crab, and a fish named James. The book was published in 1966, so it predates Sesame Street by a little bit, but Oscar Lobster is a little like Oscar The Grouch: prickly and gruff on the outside but good at heart. Oscar’s outraged that humans are taking shells and other sea treasures. He’s especially upset about a couple of kids, Howard and Janet, who are spending the summer in one of the beach houses and are using ocean items to decorate their land garden. Hector likes the kids because they throw the crusts of their peanut butter and jelly sandwiches in the water, but Oscar wants more. He decides that if the humans are taking shells he’ll take a few human things for his own aquatic garden. Early on he even tries to make off with an entire beach towel full of treasures—suntan lotion, sunglasses, a clock—and almost becomes a lobster dinner.

Needless to say it’s a story that requires more than a little suspension of disbelief. Most marine biologists would scoff at the idea of crustaceans, echinoderms, and fish conversing, never mind cooperating. And bringing in the molluscs there’s an old periwinkle who’s a sort of authority on Long Island Sound, watching over it from his own rock and singing sea shanties at low tide. And just as needless to say it’s a funny story that brings in all the elements of a summer at the beach, including a trip around a lighthouse, a storm, a ghost story, and even a shipwreck.

I’d go on to read some of Selden’s other books, including The Cricket In Times Square, his most famous book, and the much more mature Irma And Jerry, about a dog and cat who play matchmaker to a couple of humans, bringing them together in an amateur production of—I kid you not—Shakespeare’s Macbeth. A real snake, playing the asp, gets in on the act. I liked his books so much I was sad to learn that Selden died the same year I went to college to major in English, just a couple of weeks shy of my birthday, in fact.