Don’t Spread It Around.

Freethinkers Anonymous > The Weekly Essay > Don’t Spread It Around. 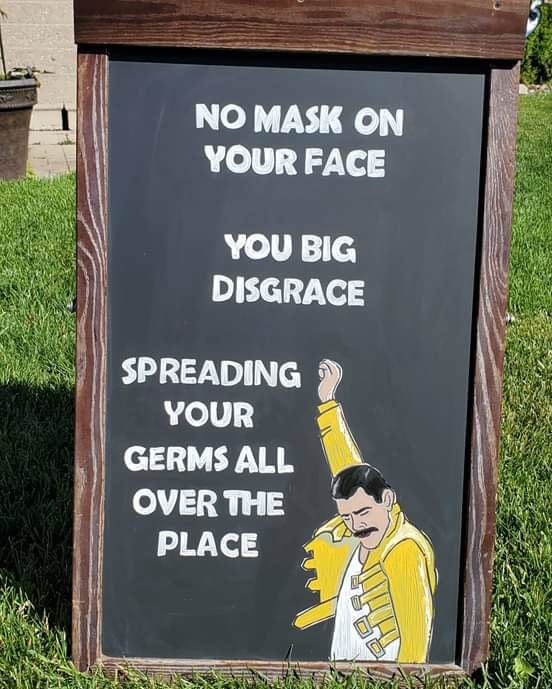 Source: Shut Up And Take My Money

Some people just don’t want to wear a mask. I’m not going to joke about that. I’ve been wearing a mask whenever I go out and I’m not going to stop. Wearing a mask is mainly a courtesy to others. While the benefits of masks may be small they still reduce the chances of spreading diseases, or at the very least spitting on people while you’re talking to them. I know we should all be staying at least six feet apart when out and about but I’ve known people who could hit a cuspidor at that distance without even trying.
As far as I know I’m not infected with COVID-19 myself but still people who don’t know me might see me not wearing a mask and say, “Hey, that guy isn’t wearing a mask. Why should I?” Using me as an example is generally a bad idea, but people who don’t know me don’t know how many mistakes I make on a daily basis, and one of the benefits of wearing a mask is even people who do know me might not recognize me if they see me out in public. And other people should wear masks too. Especially strangers. I don’t know what they’ve been exposed to or what they’re carrying. Because I had chemotherapy a few years ago I may have permanent lung damage and I don’t know what the effects of COVID-19 could be if I get it, and I don’t want to pass it around to anyone else either. I don’t know what the effects will be on anyone else.
There are a lot of things we’ve learned we can live without recently: quick trips to the grocery store, all staff meetings in the conference room every twenty minutes, putting on pants to go to work, handshakes. With the relaxation of most social rules I get that putting a small rectangle of fabric over your mouth while you’re out so you reduce the risk of spreading your own germs or your saliva on other people while talking seems like an enormous burden, especially if you insist on going out to a restaurant because you have to refill your own drink at home.
Some people say they can’t breathe while wearing a mask. If that’s the case you’re probably wearing the wrong kind of mask. Solid rubber isn’t known for being particularly permeable.
Some people just don’t like to wear a mask. I get it. Some people find them uncomfortable, or have a problem with being required to wear a mask while out and about. I knew a guy in college who felt that wearing seatbelts was good, common sense and would save lives but quit wearing them in protest when a nationwide law was passed making them mandatory. And I’m sure the windshield applauded him for being so principled right before his head went through it, but that’s another story.
Some people just don’t want to wear a mask. And some people are just assholes.