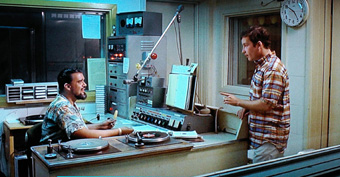 So I was driving around running a few small errands and listening to a local DJ and marveling that there’s still such a thing as local DJs. We don’t have satellite radio—my wife listens to a lot of audiobooks—and there is at least one “local” station that doesn’t have DJs and even prides itself on not taking requests, but there are at least a couple where you can call in and talk to an actual person which always gives me flashbacks to my high school days when I finally got out of the misery of riding the bus and rode home with friends who had cars and we’d listen to the radio, and then once we got home we’d go in and turn on the radio in the house—running if there was a song we really liked on. Sometimes we’d call up the DJs. It always amazed me that my friends could get into long conversations with DJs, sometimes ten or fifteen minutes. One local station had a promo where they’d play the call of the Tookie bird from George Of The Jungle and if you were the first caller you won something. One time my friend was on the phone with the DJ for about fifteen minutes and he heard it in the background and said, “Hey, I’m the first caller, right?” And the DJ laughed and sent my friend a couple of movie tickets. Every time I called the DJs always cut me off for some reason. Maybe it was my song choices.

“Could you play Hourglass by Squeeze?”

“Could you play Bohemian Rhapsody?”

“We played that earlier this week. It’s too weird to play more than that.” Click.

In college I had a couple of friends who were DJs for the campus radio station. One even put me on the air, briefly, one night. I only announced one song and did a Casey Kasem impersonation. It was pretty good but not good enough. The next day I got a call from the student manager who told me I had to go through training and orientation before I’d be allowed on the air again, so that was the end of my radio career.

Riding the bus home from work I mostly had an iPod then my phone loaded up with songs and podcasts, but for just driving around I still like regular old-fashioned radio. I like the surprise of not really knowing what song is coming up next, even if—sometimes especially if—it’s not a song I’d pick.

Between songs the DJ chattered away and finally I pulled over into a parking lot and called. There was one ring, then two, and then somebody picked up. It didn’t sound like the DJ—maybe they use a different on-air voice—but I just asked if he’d play a song I wanted to hear.

“Okay, maybe, I’ll see if I can find that, it’s a little out there, hey, thanks for calling.” Click.

Well, it was a bit perfunctory but a few minutes later the song I asked for came on.