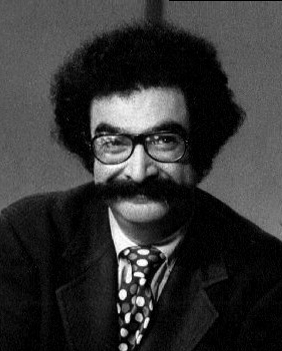 Freethinkers Anonymous has been modified as follows. It has been formatted to fit this screen.

There was a local writing contest that I entered for several years. Each year I managed to be a runner-up. I apparently made it through to the final round of judging, but always managed to fall short of third place. It became almost a badge of honor, so much so that I became afraid of winning. I would joke that I was, metaphorically, always a bridesmaid but never a bride. But I still hoped to win. One year, after I’d mailed off my submission, I had a strange dream that I was Gene Shalit’s wife. Gene Shalit is a movie critic who’s probably best known for his big moustache and wild, curly hair. I don’t know why, of all people, he percolated up from the depths of my brain. It’s also hard to explain what I mean when I say I was his wife. Sometimes in dreams I assume completely different identities; I become a different person with a different life history. Many cultures believe that, in dreams, we leave our bodies and can enter the bodies of others. I don’t buy that myself; it’s more like getting deeply involved with characters in books or movies or plays or television shows. We sympathize with and understand these characters sometimes even more intimately than the real people who are closest to us because their most private moments, though fictional, are on public display.

In the dream I, Gene Shalit’s wife, also entered a writing contest and also had a long history of being a runner-up. I told Gene this, and he laughed and said, “Well, move over Susan Lucci!” Susan Lucci, by the way, is a soap opera star who was nominated for a Daytime Emmy award approximately one-hundred and thirty-seven times before finally winning. I’ve said there’s no such thing as useless information, but knowing who Susan Lucci is comes darn close. I’d tell people about this dream and they’d laugh. What they missed was that, from my perspective, Gene Shalit’s wife was more tragic than comic. She and I shared the feeling of never being quite good enough, although my own wife was a lot more sympathetic than her husband seemed to be. Finally someone suggested that I should write a story abo ut Gene Shalit’s wife, and I realized that this character I’d briefly inhabited had a story, and that she deserved to have it told. Since I don’t know anything about Gene Shalit other than what I’ve told you, the story isn’t really about him or his wife, if he’s ever been married, but rather about the wife of a movie critic. I’m grateful to Mr. Shalit for bubbling up in my sleeping brain, maybe as a way of telling me that just because critics are paid for their opinions doesn’t necessarily make them more right than anyone else. And the same is true of contest judges. Ultimately, though, this is a work of pure fiction. I hope you’ll sympathize with and understand her, but remember that any resemblance to real persons, living or dead, is purely coincidental.