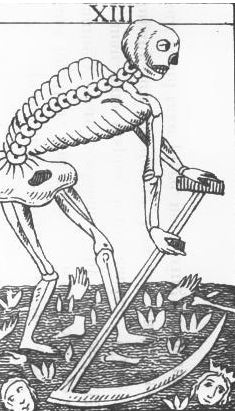 Unlike most of the other cards the next one didn’t have any figures, just a dark swirl. I could make out a tiny sailing ship just at the edge of the center.

Hilary said, ”The Maelstrom means forces of nature working against you. It could be a storm of events that shake up your life or force you to change your plans. This card may also mean that others come with you. Like you bring them along, like a crew of a ship. This is interesting. It’s paired with the Queen of Wands. With her present you’ll be able to come through whatever storm youre facing.”

July-Michael and I invited Chaz and his girlfriend to join us in renting a beach house for a week, but they’d hit a rocky spot in their relationship and didn’t want to come. So we invited Simon along, since he’d loosened up a lot. We also thought he needed to get away from the office. Who knew a tropical storm would arrive the same day we did? Michael had to cancel his plans to troll the beach for babes, and we all had to cancel our fishing trip. One day I braved the storm to visit the small aquarium at the other end of the island where I petted stingrays and watched seahorses glide about. Most days I was content to sleep late, have a bagel for breakfast, and watch the rain-spattered windows melt sea and sky together into an abstract study in gray while I worked. At night we piled into the car and went to one of the three restaurants. Michael flirted with the waitresses while we drank beer and gorged ourselves on fried pickles and oysters. The morning we left we woke to a clear, sunny sky. I stood on the patio and could see porpoises curling over the water.

“The spreading tree is life, rejuvenation, renewal, or even new growth. Putting down new roots, maybe, if you move somewhere else. The Page of Cups is reversed. That’s loss and confusion.”

August-It was time to take the glass Id saved to the recycling center. As I emptied the box under the sink I was racking my brain. How did I go through six bottles of olives in a month?

I could read the next card, which showed an old robed man with a staff climbing a hill. ”The Hermit,” I said. “That sounds like me.” Hilary nodded. “The Hermit is isolation, loneliness, but also inner contemplation, questioning, and discovery.” She tapped the card next to it, a hand holding a sword with a crown over its tip. ”The Ace of Swords means strength in solitude. These cards really enhance each other.”

September-I got home late and picked up the mail off the floor. Among the bills and catalogs was an envelope from my high school reunion committee. I paused, realizing how many years had simply slipped by. It wasn’t the worst time of my life, but I didn’t feel any nostalgia for high school either. After moving halfway across the country Id lost touch with almost everyone I’d been to high school with. I turned off my phone and locked it in my desk drawer, then locked the door of my apartment and went back down the steps to my car. I turned down a back road that briefly ran parallel to the interstate on-ramp, then turned off through woods, into darkness. The oldies station on the radio played songs that were new when I was in ninth grade. Soon there were black hills on one side of my and the river on the other. My headlights beamed into nothingness. Saturn was directly overhead. I could be anywhere, anywhen.

Hilary reached up to the final row. “The Queen of Wands reversed means chaos, disorder, anger. She’s paired with The empress who brings wisdom, generosity, and helpfulness.”

“Something like that. This is an obscure and difficult pairing.”

October-At first I thought it was the radio, then I remembered I hadn’t turned it on. I strained to listen, then stuck my head out of the shower.

Panic ran through my like an electric current as I heard movement outside the bathroom, then a knock. I grabbed the shower head. The door opened, and I heard a lilting, slightly accented voice.

I ducked back behind the curtain. ”I’m in the shower, Mrs. Schwarzherz!”

“Did you have a date last night? I saw you come here with someone, and from downstairs it didn’t sound like one of your friends.”

“I heard thumping and thought it might be your bed. I hope you used a condom.”

“I left you some peanut butter raisin cookies on your counter. They’re on a paper plate, so you dont have to return it right away.”

I hit my head against the tile. “Get out! Please get out of my bathroom!”

A bright yellow orb glowed from the upper corner of the next card. A nude figure knelt down next to a pool. It was hard to tell with the card upside down from my side of the table, but I thought the figure was scooping up water into a jug, or possibly pouring it out. “The Star,” Hilary said, “means renewal, cleansing. It’s also the myths that help us make sense of the world, that give us order and comfort. The Ace of Pentacles is reversed, meaning the status quo is reversed.”

“Sounds like Ill be sitting at the kids table at Thanksgiving again.”

November-One of my six-month dental checkups was always scheduled a few days after Halloween, a mistake I’d made years earlier and never gotten around to correcting. I blamed a succession of cavities on my weakness for leftover candy, although there might have been a conspiracy by the American Dental Association. Yet I looked forward to seeing my regular hygienist, Janet, who was bright and friendly. As I was settling into the torture chair she told me one of her earlier patients had been a hockey player. I said, “You know, I went to a fight once and a hockey game broke out.”

“Wait, what?” Janet stammered then laughed. ”That’s backward. Okay, I get it. Has anything been bothering you since you were last here?”

“Well, that whole situation in Russia has me pretty concerned.”

Janet held up her pick and mirror. “Open your mouth and shut it.” Once the cleaning was done she patted me on the shoulder. “All right, rinse and spit and you’re good to go.”

“Yep. Everything looks good. You’ve got six months to come up with new jokes.”

On my way out I popped a caramel in my mouth.

“I thought the Death card just meant change. Not actual death.” I didn’t know much about the Tarot, but I’d heard that somewhere.

“Sometimes. It’s all about placement. And it’s paired with the Ten of Swords, which means being overwhelmed. Depression, darkness. I’m sorry. There’s just no good way to read this combination.”

She began putting away the cards, leaving the last two. I turned them around to study them. I could see what she meant about the Ten of Swords. It showed a figure lying face down, pinned to the ground by swords in his back. Blood seeped from his wounds. Overhead a black sky seemed to push down. The Death card was also intimidating. A scythe-wielding skeleton against a sickly yellow background looked up at me. Its wide round eye sockets and exposed teeth seemed to be laughing at me.

December-I’ve always prided myself on being a skeptic, and yet as the year end approached I started to feel uneasy. Things seemed to have fallen into a pattern over the previous months, or was I just imagining that? It didn’t help that things at work, and outside of it, were going so well. I got all my holiday shopping done early, and even sent out cards for the first time in years. I also accepted every invitation I could. I helped Malcom and Lynne decorate their tree, celebrated the first night of Hanukkah with Maya and Kim, went to a Solstice party with Chaz and his girlfriend, and had tea one afternoon with Mrs. Schwarzherz. We nibbled stale ginger snaps while flurries skittered by the window. I drove back to my old home to spend Christmas with my parents, then got back in time to go to Simon’s New Years Eve dinner party where we ate Cornish hens and played Trivial Pursuit. Everyone else faded out around ten oclock. I didn’t want to admit I was anxious. As I drove a slightly drunk Michael home I thought about getting him to spend the night on my couch, but then he played songs on his phone and sang along. Badly. At home I huddled in bed and read until I heard fireworks outside and my bedside alarm clock chimed. The next morning I slept late, and woke to streams of bright sunlight. Nothing had happened. I was still here. What a coincidence.