It’s Part of a Ceres.

Freethinkers Anonymous > Not Non-Fiction > It’s Part of a Ceres. 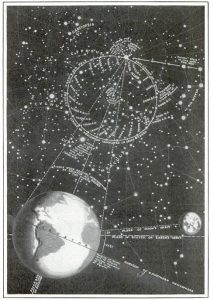 “Guys, come here. Check this out.”

“Dunno. It’s metal. It’s been forged. This is some real quality work. This is beyond anything we could make. Way beyond it.”

“I always knew it would happen eventually.”

“Quit stalling and tell us.”

“The one who came and stayed with us for a while. The one who cleaned the house and cooked and stuff.”

“I remember she was a terrible housekeeper. One morning I found a chamber pot in my sock drawer.”

“Yeah, and then she ate that poisoned apple and fell into that deep sleep for, what, a year? Remember how we made that nice case for her? And then we ran her stepmother off a cliff.”

t up. I thought all that was resolved when that prince kissed her and woke her up and she left.”

“Remember why we left? That crazy stepmother had to have relatives. I knew sooner or later they’d come looking for revenge. That’s what this is. It’s a weapon.”

“Get out of here. No one knows where we are. I didn’t tell anyone where we were going. Did you?”

“See? No one could know where we are. There’s no way this is a weapon.”

“Shouldn’t we at least be prepared? This could be serious. We could all be in terrible danger. Come on guys, get your picks and axes ready.”

“And that’s not an axe, that’s my…and wipe that stupid grin off your face! Do we have to take him?”

“We’re not leaving anyone behind. There are only seven of us.”

“Six. Remember? We lost the one who was in a bad mood all the time on the way.”

“Hey, look at this. It’s a camera. This isn’t a weapon. It’s just for exploring.”

“Don’t be paranoid. Come on guys, line up. Let’s do something fun for the folks back on Earth. Come on, everybody gather around. You—get that stupid grin back on your face. Okay, all together now!”

“I haven’t had cheese in ages.”