I Saw The Light.

Freethinkers Anonymous > Ramble With Me. > I Saw The Light.

Blackout. The house is eerily quiet. A flashlight casts shadowy illumination that makes everything unfamiliar. I’ve twisted the switch on a lamp, but I can’t be sure whether it’s on or off. I twist it a few more times then lose count. Was it an odd or even number of twists? Will it come on when the power comes back? There’s nothing to do but sit and think about lamps.

As a kid did you ever read the story of Aladdin and see a picture of his lamp and wonder what was wrong with it? It didn’t have a shade or a bulb, and where were you supposed to plug it in?

In second grade I’d b e even more confused when I read the story of Diogenes who took a lamp out in broad daylight. The story said he was looking for an honest man. I thought he must have been looking for outlets because you can only carry a lamp so far before the cord runs out. Later I would understand that he was making a point that an honest man is so hard to find that one must be sought with a lamp in the daylight. When I first read the story I thought the honest man he was looking for would be the one who’d ask, “Why are you carrying a lamp in broad daylight? Are you trying to sell it or are you just some kind of idiot?”

I think Diogenes would have been impressed by what a wise child I was. 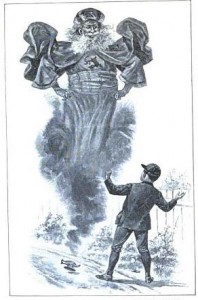