The Egg And I.

Freethinkers Anonymous > Adventures In Busing. > The Egg And I.

Sometimes my walk home from the bus takes me by a large stand of bamboo. I’ve heard that people often regret planting bamboo because of how quickly it takes over. In this particular yard it hadn’t just taken over. It had formed a massive wall that completely blocked the yard, the house, and formed a dark tunnel around the driveway. Sometimes in the early mornings if I walk by there when it’s still dark I can hear the bamboo rustle with birds waking up.

In a grassy patch in front of the bamboo I found an egg. Why there was an egg there is still a mystery. It was too big to be a wild bird egg, with the possible exception of an eagle and then it was too small. It was white and the size of a regular chicken’s egg you’d buy in the store, but it was also flecked with little pieces of what could have been dried grass. It was also strangely heavy for its size, and didn’t feel quite like a regular egg. I picked it up and turned it all around, not sure what to make of it or what to do with it. Finally I tossed it onto the road, thinking it would bounce or just roll.

It broke. Yellowish yolk and clear fluid leaked out onto the road. 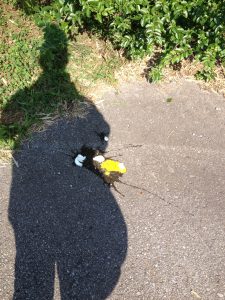 Here’s photographic evidence even though it should be unnecessary. How could I make up something this weird?

Just then a car came out of the driveway. Oh great, I thought, now I’m going to have to explain to whoever lives behind the bamboo why I’m breaking eggs on the street. And the honest explanation sounded too ridiculous to be plausible. Or maybe, I hoped, it would sound so ridiculous they’d realize it had to be true.

A bearded guy with glasses poked his head out of the driver’s side window. “Hey, feel free to take some of that bamboo with you!” he said then drove off.

I was glad he left in such a hurry or I might have asked how many eggs his bamboo laid in a week.