Someone At Apple Has Read Philip K. Dick.

Freethinkers Anonymous > Submitted For Your Approval. > Someone At Apple Has Read Philip K. Dick.

I forget what gave me the idea–it may have been Shit That Siri Says–but I started asking my phone to tell me what certain movies were about. And I noticed a funny pattern to the responses.

This response really intrigued me: 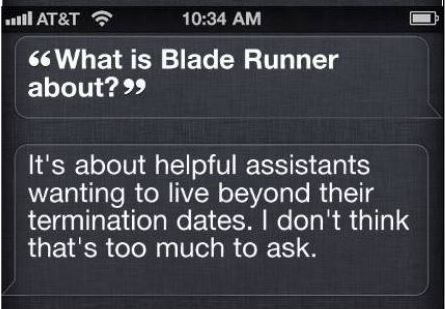 I don’t think that’s too much to ask either, and I decided to take it a step further. You probably know that Blade Runner is based on the Philip K. Dick novel Do Androids Dream Of Electric Sheep? So I asked.

Disappointing, Siri, very disappointing. That was a few years ago and recently I decided to ask again. The answers were…interesting.

So someone at Apple is a fan of Shelley. I didn’t realize they were hiring first year English majors. Anyway I asked again. 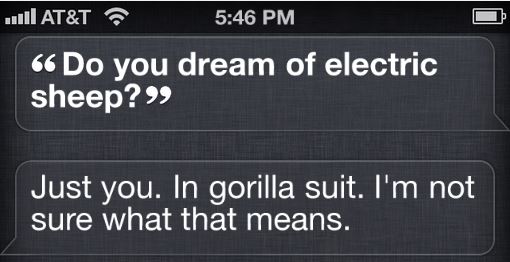 Me neither, but as long as my phone isn’t dreaming of me in my birthday suit it doesn’t concern me.

This one really upset me. I think even an artificial intelligence should have its own interests, its own life outside of me. I don’t want it to be solely about me. I can’t handle that level of responsibility.

Oh, my phone calling me Spunky The Wonder Squid doesn’t bother me. I told it to do that.