The Signs Are Everywhere. 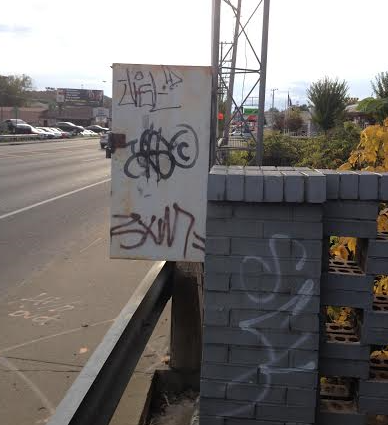 But Dorothy they did not harm at all. She stood, with Toto in her arms, watching the sad fate of her comrades and thinking it would soon be her turn. The leader of the Winged Monkeys flew up to her, his long, hairy arms stretched out and his ugly face grinning terribly; but he saw the mark of the Good Witch’s kiss upon her forehead and stopped short, motioning the others not to touch her.

Suddenly he lifted an elbow and flared his nostrils as he snuffed the chill moist air. “There’s a taint in the fog tonight,” he announced.

The enemy comes on in gallant show;

And something to be done immediately.

“I saw a sign on a guy’s garage that said ‘Don’t even think about parking here’. So you know what I did? I sat right there and I thought about it. I yelled up at his window ‘Hey buddy, I’m thinking about it. Go ahead, call the cops. I’ll just tell them I was thinking about something else.'”–Paula Poundstone

“It is this,” I answered, producing from beneath the folds of my roquelaire a trowel.

Rocky Horror: I woke up this morning with a start when I fell out of bed.

Chorus: That ain’t no crime!

Rocky Horror: And left from my dreaming was a feeling of unnameable dread.

Chorus: That ain’t no crime!

“And I assure you there is a mark on the door—the usual on in the trade, or used to be. Burglar wants a good job, plenty of Excitement and reasonable Reward, that’s how it is usually read.”–J.R.R. Tolkien, The Hobbit

In fact, very few people on the face of the planet know that the very shape of the M25 forms the sigil odegra in the language of the Black Priesthood of Ancient Mu, and means “Hail the Great Beast, Devourer of Worlds”.– Terry Pratchett and Neil Gaiman, Good Omens

“It’s a sign all right. We’re going out of business.”–Janine Melnitz, Ghostbusters