Beneath The Bough Of Mistletoe. (Repost.)

Freethinkers Anonymous > Submitted For Your Approval. > Beneath The Bough Of Mistletoe. (Repost.)

In the spirit of the season I’m re-gifting this post from a few years ago.

The tradition of kissing under mistletoe is one I’ve always wondered about. Specifically, how much of an obligation is there? If 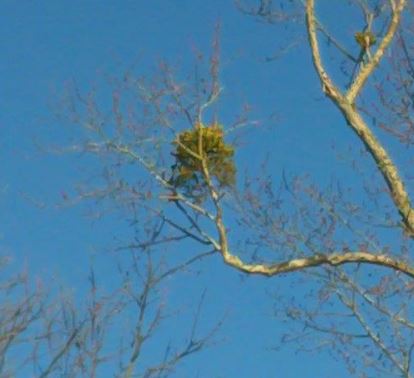 you’re standing under mistletoe and you don’t realize it do you still have to be kissed? Or do you have to kiss a complete stranger if you see them standing under mistletoe? What are the repercussions if you don’t kiss them? Would a handshake do? With all the colds and flu going around at this time of year maybe it would be better to leave it at a friendly nod. That’s what I’d prefer, especially when I think back to family gatherings where, even without any mistletoe around, I always had to kiss my great Aunt Gerda, which was like making out with an oversized kiwi.

Anyway, I decided to do some research into the history of the tradition of kissing under mistletoe and found, well, not much. It seems pretty obvious that the tradition is pagan in origin, and there are very old accounts of mistletoe being used to promote fertility. Mistletoe stays green throughout the winter, so it really stands out on the trees it grows on. Just around town I know at least half a dozen places to find real live mistletoe, not the cheap plastic crap they have in the stores, although that does raise an interesting question: if it’s not real mistletoe do you have to do something different if you see someone standing under it, like punch them in the face? What I found in my research, though, is that the first mention of the tradition of kissing under mistletoe in print only dates from 1813. The tradition itself must be much older than that, but no one really knows how much older, or how it got started in the first place.

There are some interesting variants to the tradition, though. In some places it was believed that if the mistletoe wasn’t burned on Christmas Day or by Twelfth Night then all the couples who’d kissed under it would be enemies by the end of the year, which would be a really good way to break up people you really don’t think belong together, especially if you want to date one of them yourself. And in other places anyone who didn’t get or give a kiss under mistletoe at a Christmas party would be beaten with a broom, which brings back memories of my senior prom, but that’s another story.

There’s also a lot of non-kissing lore associated with mistletoe. Back in AD 77 Pliny wrote that the Druids revered mistletoe and would cut it from the tree with a scythe made of gold. It’s an interesting story, but there are two problems with it. For one thing Pliny was writing about people in France, not Druids, and he also says his source is something he read on the internet. People believed mistletoe grew on trees that had been struck by lightning, so putting mistletoe on a house protected it from ever being hit, since everyone knows that lightning never strikes the same place twice, and is also extremely gullible. Mistletoe was also a medieval form of aloe, since people believed it could cure anything, and was even sometimes called allheal. It was sometimes applied to wounds, or occasionally eaten by people who died before they could tell anyone what it tastes like, since mistletoe is poisonous.

In some parts of Britain it was considered very important to feed mistletoe to the first cow to give birth in the new year. This was supposed to guarantee a healthy herd, which would be useful since the cow that ate the mistletoe would probably be giving poisoned milk for a while. And, strangely enough, even though mistletoe is poisonous some people believed it was an antidote to any poison. Maybe people thought that if you’d been poisoned if you swallowed some mistletoe the two poisons would fight it out and leave you alone. Or maybe they were operating on the principle that what doesn’t kill you makes you stronger. I really don’t know. All I do know is that, if given the choice, I think I would rather eat mistletoe than have to kiss my Aunt Gerda again.