I Hope He Still Has The Pony.

Freethinkers Anonymous > Happy Birthday. > I Hope He Still Has The Pony.

Today is the birthday of two comedians who, in spite of sharing a surreal style, are completely different. I’m starting with the one I knew first but look for a second post in a few hours.This placement is not meant to set one above the other but to treat them equally. 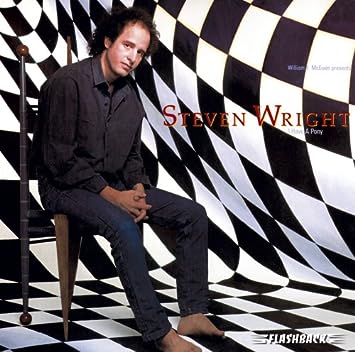 My friends and I were walking along the road when I noticed something white and plastic in the grass, so naturally I picked it up. I’d pick up almost anything I saw on the ground that looked unusual which led to me collecting a lot of odd stuff. On this particular occasion it was a cassette tape.

“Hey!” said my friend Jim. “That’s that guy who says Thanks.”

From the way he said it I knew immediately he was talking about Steven Wright. It was a cassette of I Have A Pony. I kept it and listened to it so many times I still have large chunks of it memorized.

I’ve heard it said that there are comedians and there are comics. Comedians, the saying goes, can improvise. They respond to the audience and can change their act at a moment’s notice. Comics on the other hand just tell jokes they’ve memorized.

This seems to me like it’s creating a hierarchy that sets some performers higher than others based solely on style, but, according to that definition, Steven Wright is a comic. In the book I Killed: True Stories Of The Road From America’s Top Comics Wright tells the story of how he once performed at a club with a rotating stage. While he was performing a fight broke out in the back of the room. He never commented on it and went on with his act but every few minutes he came back around and could see how the fight was going.

It’s a funny story and it doesn’t make me think any less of Wright as a performer. In fact I think it’s pretty impressive that he never let it interfere with his act.

A few years ago when Steven Wright came to Nashville he talked to the Nashville Scene about his career and how comedy never gets easier.