It’s All Been Done Before.

Freethinkers Anonymous > American Graffiti. > It’s All Been Done Before.

When I was a kid I drew a lot of strange things. At least adults found them strange. I have a very clear memory of one of my preschool teachers telling my mother, “He draws such unusual things.” What I’d drawn was a bunch of stone faces rolling down a mountain. What’s funny is I drew that after seeing a picture of Mount Rushmore. It was just my way of reimagining what I’d seen, because I had no clue what it was or what it meant. I doubt my teacher would have found it that unusual if I’d just drawn Mount Rushmore. About that same time I drew a picture of a bunch of people in a boat in a cave. They were all holding candles. A woman looked at it and told me, “You’re so creative. When I was a little girl I never knew what to draw. You draw such original things.” And I felt guilty. The picture was inspired by my first trip to Disneyworld and the Pirates Of The Caribbean ride. I’d just stripped away all the pirates because I couldn’t draw them and made the cave dark and given everybody candles because, well, it was dark in the cave.

I felt guilty because it wasn’t really original. And I’d spend literally most of my life studying art and art history before I’d realize that there really is no such thing as originality. Everything is a blend of everything else.

The breakthrough would come when I read Milan Kundera’s novel Immortality. In one part he describes art history as a clock. The clock strikes midnight when Jackson Pollock creates action painting, removing the direct contact between brush and canvas that’s been the basis of art since the first cave paintings. It’s the end of originality, the end of art as a progression. It bothered me to think we were living in a post-midnight world, that anything that came after the early 1950’s was merely a repeat of what had come before. Art history was finished, defunct, washed up, in the red, kaput.

Then I realized that’s kind of like saying history itself ended with World War II. History, and art, march on.

If you’re wondering what any of this has to do with the graffiti above it’s this: most graffiti I see is abstract. It’s usually a name or a word. This particular work sticks out because it’s a picture of something. And it cracks me up because it’s a narwhal cyclops with, um, wings on its head—a mashup of a few different things.

It’s unusual but it’s not original. And that doesn’t matter. It’s art and that makes it part of art history. 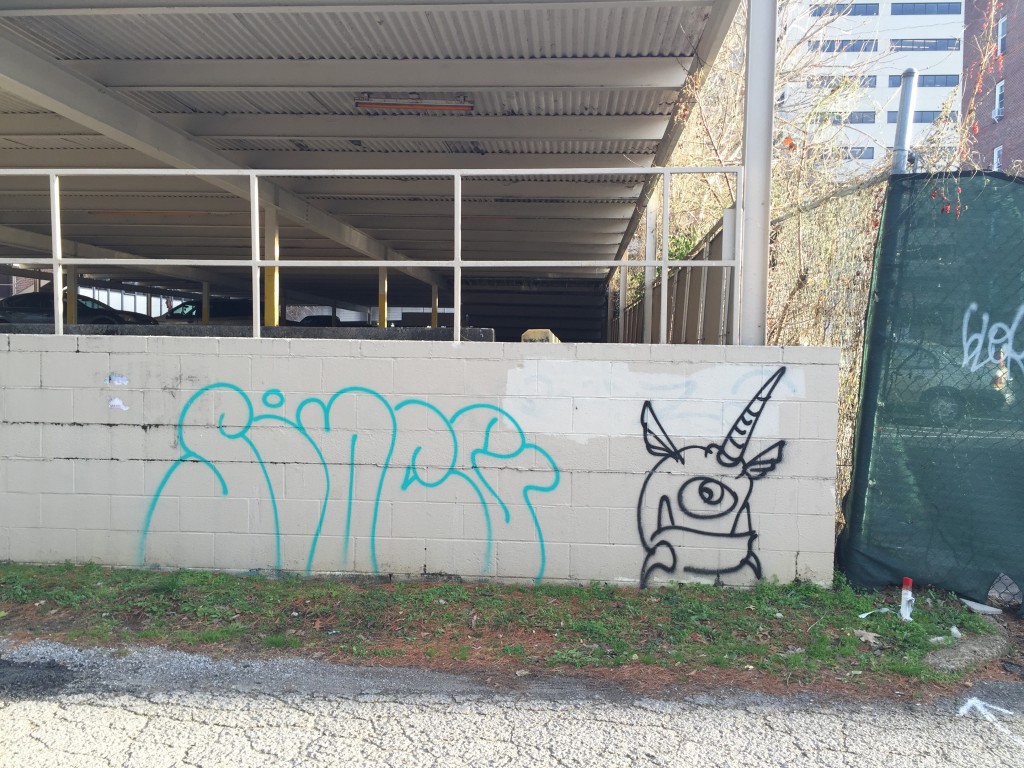