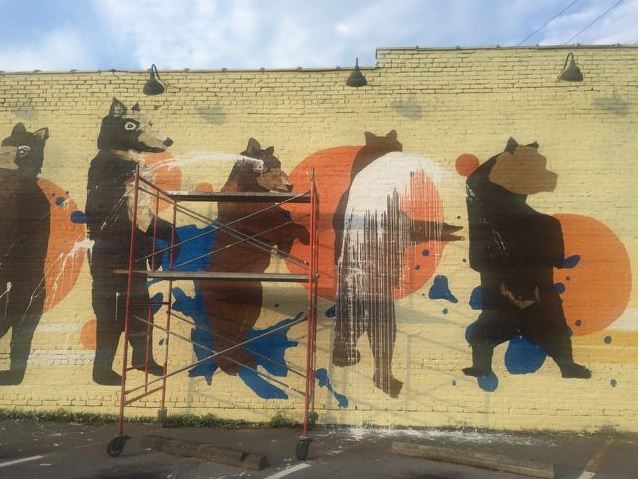 Because I usually write positively about graffiti that might give the impression that I’m fine with vandalism and lawbreaking. I’m not. Just because I think there’s graffiti that’s very artistic, well-done, aesthetically pleasing, whatever you want to call it doesn’t mean I’m all for letting anyone tag anything anywhere. It’s just that it’s complicated. Sometimes I look at graffiti and see a person with an intense need to express themselves but no other place to express themselves. And a lot of the places where I see the most artistically interesting graffiti are abandoned, or at least unused, buildings, places with blank walls. Adding a little color and some vibrant language makes these places better. It makes them a little nicer to look at. The same is true of dumpsters which are ugly, utilitarian things. A little graffiti can make them interesting and unique. It can make them into works of art.

At least that’s what I think and I know that sort of thinking puts me on a really slippery slope, but I think there’s got to be a balance between totalitarianism where expression is subject to approval from some overarching authority and chaos where everybody can do whatever they want and there’d be a lot of wanton destruction.

Two recent stories made me think about the need for limits.

First there’s the story of Casey Nocket, a graffiti artist who used acrylic paint, which is really hard to remove, on natural monuments in US national parks. I’ve done volunteer work in parks, including cleaning up trash left behind by thoughtless people. These are places people go to when they when they want to escape the urban world. And nature’s changing these areas enough as it is. These are spaces that have been set aside to be preserved.

I consider this “bad” graffiti no matter how aesthetically interesting it might have been. How do I make that distinction? It’s complicated.

The other event was even closer to home. A dancing bear mural painted on an East Nashville building by artist Leah Tumerman was splattered with white paint. This isn’t even a case of graffiti, really. The building’s owner asked Tumerman to paint the mural. And the white paint was presumably some unknown person’s way of showing displeasure with it. Or maybe they just wanted to put their own mark on it. Some people love the mural and some people hate it but that shouldn’t be a reason to deface it.

Tumerman, with the help of some volunteers, is now fixing the mural and incorporating the vandalism into the mural. And her sister has a strongly-worded rant about the situation that I think is brilliant. It is a nice Art 101 lesson that cuts through my own woolly thinking.

So what’s the distinction between graffiti, street art, and vandalism? It’s complicated. I don’t want to say that anything good comes out of vandalizing natural monuments or a public mural because I don’t want it to sound like I approve because I think they’re terrible things. But it does make me stop and think about why I consider them terrible things. It makes me stop and think about why there should be limits, and maybe that is something good. And maybe I could get your help with my woolly thinking too. Feel free to splatter your own opinions in the comments section. Maybe I’m overcomplicating all this.

And seen any good or bad graffiti? Can’t decide which it is? Send your pictures to freethinkers@nerosoft.com. Maybe I’ll still be just as confused.