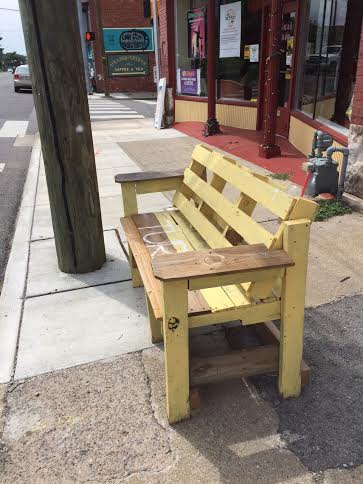 You never know whom you’re going to sit next to at a bus stop.
He was skinny but had full, round cheeks that were burned red. Scraggly straw-colored hair curled out from under the tan cap he wore, as though the wisps were growing up around it, or escaping. There were holes in his shirt and his thin arms were tanned with red spots.
“I just spent thirty days in jail!” he yelled at me after I’d sat down. I wondered if maybe I should have walked to the next bus stop but according to the schedule the next one would be along any minute now. I didn’t want to risk being between stops. This bus stop was also in front of a bank. A security guard stood in front of the door. I looked out at the traffic.
“Drunk and disorderly!” he yelled. “That’s why they arrested me!”
Thirty days for a D&D seemed a bit extreme. I thought the usual sentence was a night in the drunk tank.
“I fought off eight of ’em when they tried to take me in!”
This information shed some light on why he’d been held so long, although it still seemed extreme.
“I told them they was a bunch of communist shit-troopers when they was takin’ me in!”
I turned my head away so he wouldn’t see me smiling and filed away “communist shit-trooper” for future use. Where was the bus?
“Hey man, you like music?!?”
This was said at the same full volume as the other information he’d imparted and in spite of myself I turned.
“Sure.”
He had a CD player in his hand.
“I’m listening to the fine music of Styx! You know Styx?”
“Domo arigato, Mr. Roboto.”
He grinned. His teeth were almost as tan as his arms. “Yeah, man! Fine music! This is one thing I can keep when they put me in jail again! You wanna buy some drugs?”
The abrupt shift threw me. I quickly shook my head and leaned forward to look past him, willing the bus to appear.
“You wanna buy drugs,” he continued at full volume, “you just go two blocks over down that way!” He motioned to the street behind the bank. “You turn right and they’re there. They’ll ask for four hundred. You say you’ll only pay twenty-five. You agree to four hundred they’ll know you’re an undercover cop.”
This isn’t information I think I’ll ever use but I filed it away as the bus pulled up. As I took my seat I looked at the man still sitting at the bus stop, and I wondered what the security guard standing behind him thought of all this, if he’d even been listening. Even though the man shouted every sentence maybe the guard tuned him out.
I remembered this encounter when I read about the FBI placing hidden microphones in and around the Oakland, California courthouse, including at bus shelters. It’s a potential violation of the Fourth Amendment–essentially treating anyone in the vicinity as a suspect, if not a criminal. Not all of us speak at full volume even when we aren’t passing secrets. Such blanket surveillance also raises practical questions. Who goes through the information collected, who decides what’s relevant? And where is it all being filed away?