turtles all the way down

Most graffiti is a person’s name or nickname–what’s commonly known as a tag. And when you think about it a name, especially when elaborately drawn, is more than just a word. It’s a picture. It says as much about how the artist sees him or herself as a self-portrait would. And it’s the most personal expression an artist can make and have a history that spans artists as different as Rembrandt and Kahlo. So it was really interesting to me that someone tagged a couple of different places with what I think it a self-portrait. It’s a caricature and not realistic, but it’s meant to be a self-portrait. At least I think it is since as usual I don’t know the artist and I can’t ask them about it. So I’m just speculating, but bear with me here.

What made me think of the connection between signatures and self-portraits wasn’t just the fact that this graffiti is a face rather than the usual name. I also thought of Salvador Dali’s massive painting The Ecumenical Council, from his religious period, finished in 1960 when he was fifty-six. In his youth Dali had been an ardent atheist but later would meet Pope Pius XII and converted to Catholicism. 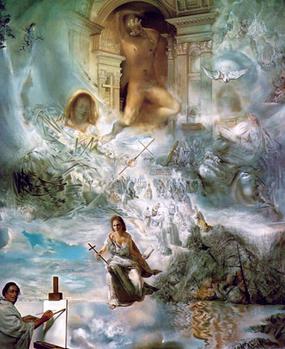 Or did he? Scholars interpret this painting at representing the union of Heaven and Earth. The figure in the upper center is believed to be God whose hand is up because no one can look on the face of God. The interesting thing, though, is Dali’s self-portrait in the lower left. He’s painted himself as a painter. This has been interpreted as his substitute for a signature. And yet Dali signed most of his paintings with just his name. Self-portraits are extremely rare in his work. He occasionally painted himself as a child but almost always facing away from the viewer. In a few of his early surrealist works he painted himself or figures that represented him but with a hand over the face.

Maybe this is really Dali’s not so subtle jab at religion–suggesting that the real creator is the artist. Isn’t that blasphemy? Well it might have been a blast for Dali anyway. Yes, he went though the motions of converting to Catholicism but at a time when being an atheist among artists was common, even expected. He claimed to support Franco then the Spanish monarchy when most artists were joining the Communist party or at least claiming to be apolitical. I think he did these things solely to shock people, and throwing a little blasphemy into his work was his way of playing both sides. He didn’t take anything too seriously.

I know I’m not saying much about graffiti here, especially not the graffiti pictures above, but I am trying to tie graffiti into the more respectable world of serious art criticism and art history. Why? Because I think it’s funny that it shocks some people who take art way too seriously.