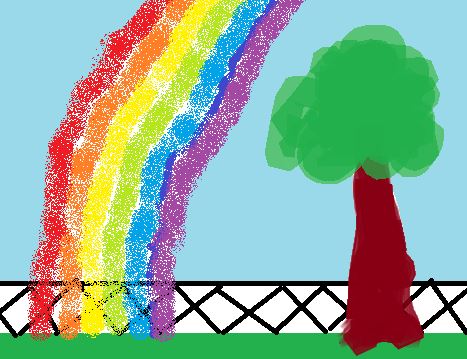 It wasn’t supposed to rain. At least I don’t think so. I really didn’t check as I was leaving the office because there wasn’t a cloud in the sky. At least I don’t think so. I really didn’t look up. It was sunny and that’s enough, right? And I made it most of the way before it started. I was walking down the home stretch to home when the rain started. It was light but still wet, and the sun was still out, the kind of rain some people call “liquid sunshine”. Sick, twisted people who are desperate to find the bright side of everything. I know I’m not one to talk since I’m an incurable optimist myself. When a friend was hit by a car I said, “Well, on the bright side…” He punched me before I could finish the sentence which is okay because it was a Volkswagen Beetle that hit him, but that’s another story. The point is even the sunniest optimist has to draw the line somewhere and I draw the line at rain. And then it gets washed away, but I keep redrawing it.

So there I was walking home and a light rain started. It was light but still wet. And one of my neighbors was standing out in her front yard with her dog. She had a leash in one hand and an umbrella in the other. My neighbor, I mean. The dog had two pair and a king high in her hand and was obviously eager to get back to the game.

“Isn’t this wonderful?” my neighbor said.

“Yes,” I said, smiling, because I was too polite to say, “WHY ARE YOU TALKING TO ME? CAN’T YOU SEE I’M TRYING TO GET OUT OF THE RAIN?”

“Have you seen a rainbow?” she asked.

“No,” I said, smiling, because I was too polite to say, “WHAT’S WRONG WITH YOU? CAN’T YOU SEE I’M GETTING SOAKED HERE?”

“There should be one around somewhere,” she said.

“Yes, keep looking out for it,” I said because I was too polite to say, “AS SOON AS I GET OUT OF THIS RAIN AND DRY OFF DEAL ME IN. I’M TALKING TO YOUR DOG.”

I kept going and got to my house. And there, in the backyard, was the rainbow. It was glorious. It was amazing. I even thought about going to get my neighbor, but I have to draw the line somewhere.