Freethinkers Anonymous > Ramble With Me. > Get A Ride!

Yesterday I wrote about how, like any good Star Trek fan, I celebrated the 50th Anniversary on September 8th with a marathon of episodes and movies, including Star Trek IV: The Voyage Home which I first saw in the theater with a friend who I thought was a bigger Trek fan than me. He had a whole series of books, and comic books, and was the only person I knew–prior to the recent reboots, anyway–who knew Uhura’s first name.

And then as we were coming out of the theater he said, “Well, it was pretty good except for that crap about the whales.” And I couldn’t believe what I was hearing. I thought every fan knew that Star Trek’s science fiction was merely a smokescreen that allowed Gene Roddenberry to take on controversial subjects like racism, sexism, and, um, the environmental threat posed by invasive species. 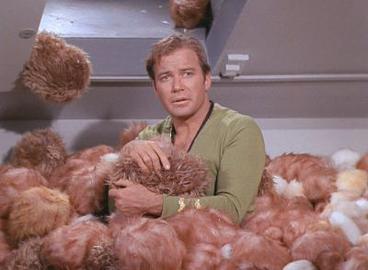 Tribbles were actually a metaphor for the zebra mussel. Source: Wikipedia

And for a while I thought, Well, he’s just not a real Star Trek fan. It was a terrible assumption on my part. I was falling into the No True Scotsman fallacy, and not just because James Doohan’s accent was fake, but that’s another story. Fans come in many types and varieties. All that makes someone a Star Trek fan is that they enjoy Star Trek, right? Besides I have a conundrum that’s got me questioning whether I’m really a fan. In his book Get A Life William Shatner shares a story about his decision to walk from his hotel to a horse show one morning. It was a crisp, sunny day and he was feeling his oats. It was only when he realized how many miles he’d be hoofing it that he started to panic. At an intersection he talked to a couple in a pickup truck stopped at a red light, explaining who he was and begging for a ride. They pointedly ignored him but before they drove off the woman yelled, “Kirk sucks! Picard rules!”