Keep On The Sunny Side.

Freethinkers Anonymous > American Graffiti. > Keep On The Sunny Side. 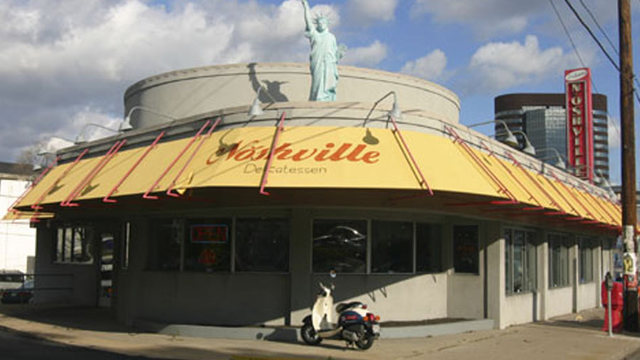 Noshville on Division Street closed its doors at the end of 2015. Well, the restaurant has other locations, but the one on Division was its first and was the one I knew best because it was so close to where I worked. And I never thought to take a picture of it in its heyday when the Statue of Liberty stood tall atop its roof.

I still walk that way regularly, down the sunny side of the street, under where its awnings used to hang, usually on my way to JJ’s Coffee Shop. And there’s a bit of a tale: Noshville had been there since 1996. JJ’s has been there since 1974 and is still going strong in spite of a couple of major coffee chains moving in just a few blocks away. Noshville decamped to make way for developers who want to put up an apartment building but JJ’s is being the thorn in their foot. The owner of JJ’s has a lease through 2020 and, bless him, is defending his right to keep going at least that long in court. And so far has been successful.

I don’t mean to turn this into an ad for JJ’s but I like the coffee and the atmosphere of the place, and it also sells an eclectic mix of European chocolates and craft beers. It’s also the oldest ongoing establishment in an area that’s been in flux and is changing even now.

Anyway I happened to be walking down the other way—the shady side of the street, and I do mean shady, but that’s another story. I turned around and looked back and saw this:

It’s striking. It’s powerful. I have no clue what it says. It’s also huge. It also made me think about how much the building formerly occupied by Noshville looks like a submarine.

Graffiti is usually seen as a mark of a bad neighborhood, something that lowers the property value in an area, but the space where Noshville was has been sitting empty for more than nine months now. It’s hard to imagine the value getting any lower, but an artist has added something to the area. It’s fascinating and thought-provoking. Maybe it will even inspire conversation, at least among people walking down the shady side of the street.