Adventures In Busing., Not Non-Fiction 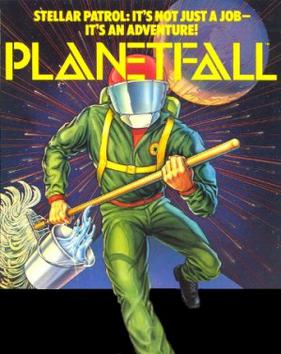 As a teenager with my first computer I played a lot of text-based games. They’ve stuck in my memory, maybe because I spent entirely too much time on them. The three main ones were Colossal Cave Adventure, Planetfall, and The Hitchhiker’s Guide To The Galaxy. The Hitchhiker’s game, like the novel, was written by the late great Douglas Adams, and was extremely difficult, even for fans of the books. The most seemingly inconsequential actions at the beginning of the game, such as feeding a cheese sandwich to a small dog, could have consequences much later in the game. That small things can have a large impact and you should never pass up the chance to do something nice are, I think, two major tenets of Douglas Adams’ philosophy. Colossal Cave Adventure was an open-ended fantasy treasure hunt that I never really got into. Planetfall was the one I spent the most time on. For some reason its plot of saving a lonely castaway on a distant planet appealed to me. And I was thrilled to learn the robot Floyd–spoiler alert–has to die as part of the game’s solution and will never again ask if you want to play Hucka-Bucka-Beanstalk but that’s another story.

It occurred to me while riding home one day that public transportation would make a pretty good text-based game in itself. I don’t have the computer skills to write a game but I thought it would make a funny story. So I’m foisting it on you, the patient, intelligent, thoughtful people who drop in here regularly. Even if you’ve never played any of the games I’ve mentioned you might recognize a few details.

You are standing on a desolate area of sidewalk that stretches from EAST to WEST. In front of you is YON BUS.

You board YON BUS. The driver is a surly looking peasant and demands payment before he will allow you to take a seat.

You check your pockets. You are currently carrying KEYS, a PHONE, a WALLET, and a small amount of LUCRE.

You don’t have enough.

The driver scowls at you.

Inside the wallet you find PICTURES, ID, CREDIT CARDS, a TWENTY-DOLLAR BILL, a TAKE-OUT RECEIPT, and a BUS PASS.

The pass slides effortlessly through the slot in the fare machine which rings merrily.

The driver grunts and closes the door. He tells you to take a seat.

The only available seat is across from a woman with a small dog in her lap. The dog growls menacingly at you. However the seat is currently occupied by a cold half-eaten CHEESEBURGER.

You sit down. Unfortunately you are still holding a CHEESEBURGER. Cold sauce of an indeterminate origin trickles onto your hand.

You don’t see any appropriate trash receptacles and you don’t want to be guilty of littering.

The small dog greedily devours the cheeseburger and gives you a look of intense adoration. You will be its best friend for the remainder of the journey.

Your phone is the pinnacle of modern technology. You can play games, listen to songs, perform calculations, send and receive emails, or catch up on the latest news. A small icon in the upper right hand corner indicates that the only thing you can’t do with it right now is make a phone call.

Your phone begins to play a jaunty medley of ‘80’s one-hit wonders. You lean back and enjoy the ride.

You don’t remember exiting the bus but you now find yourself in a dark cavernous room. The word DING glows from the far wall in bright red letters. Looking around you see a BAG and a JAVELIN. A grue is also in the room and advances menacingly.

You now have the JAVELIN. The grue continues to advance menacingly. It asks if you want to play Hucka-Bucka-Beanstalk.

With stunning accuracy you throw the javelin. The grue disappears in a cloud of greasy green smoke.

You now have the BAG. It’s full of copper ducats!

There are no exits. The word DING continues to glow on the far wall.

The sound wakes you up. Someone has pulled the cord to request a stop. You are still on the bus and have been dreaming.

You check your pockets. You are currently carrying KEYS, a PHONE, a WALLET, a small amount of LUCRE, and COPPER DUCATS.

You look out and realize you’ve passed your stop. The bus is now speeding along a desolate stretch of interstate. The woods are dark and likely infested with grues. Are you sure you want to stop?

Your phone begins to play a lively medley of ‘90’s one-hit wonders.

The bus rolls into the DEPOT. The driver announces that everyone must leave the bus. Exits are BEHIND and FORWARD.

You exit the bus via the rear doors avoiding a scowl from the driver.

It will be at least fifteen minutes before the bus departs. You begin to feel hungry.

You look around and see a VENDING MACHINE. Across the street is a COFFEE SHOP.

The machine contains a delightful array of tempting snacks. Unfortunately it does not take LUCRE, TWENTY-DOLLAR BILLS, or DUCATS.

There’s a long line at the coffee shop. You’ll have to wait and might miss your bus.

The line moves briskly. You get to the front and order a triple-espresso mocha topped with whipped cream, chocolate shavings, caramel drizzle, and chives. The barista hands you your DRINK and CHANGE.

You now have a DRINK. It weighs approximately six pounds.

You now have CHANGE.

You return to the depot with two minutes left before the bus leaves. A voice over the intercom reminds you eating, drinking, and smoking are now allowed on the bus.

You guzzle the combination of coffee, sugar, and dairy in record time. You are now refreshed for the remainder of your journey!

The driver insists you need to pay to re-board.

Your pass is expired and there are no valid charges left on it.

Luckily you received exact change at the coffee shop. You insert the correct amount in the fare taker. The driver scowls and tells you to take a seat.

Your phone’s power is critically low and playing songs would be an unnecessary waste of power. You lean back and pretend to enjoy the ride.

Up ahead on the left you see your HOME.

You pull the cord. There is a satisfying “Ding!” An automated voice reminds you to remain seated until the bus comes to a complete stop.

You are pitched forward onto your face as the bus comes to a halt. The driver cackles merrily as you pick yourself up off the floor.

The driver scowls as you disembark.

You are standing on a desolate area of sidewalk that stretches NORTH and SOUTH. Behind you is an EERIE CASTLE. Ahead of you is HOME.

The Eerie Castle has been bringing down neighborhood property values for years. With great sagacity you decide that midnight on a Tuesday is the ideal time to explore its premises. You enter hesitantly. The door closes behind you. Ahead you see two large eyes glowing in the darkness. You recognize the small dog from the bus, only now it is thirty-five feet tall and weighs approximately six-hundred pounds.

The dog recognizes you as the person who gave it a cold, rotten cheeseburger slathered with a sauce of pure salmonella extract and brown, slimy, rotten lettuce. It therefore considers you its best friend in the entire universe and stares at you with infinite adoration.

Obvious exits are FORWARD, BACK, and STAIRS.

Because you forgot to activate the flashlight app on your phone you don’t see that large sections of the floor are missing. You fall into the basement and are eaten by a horde of zombie alien okapi.