Freethinkers Anonymous > Ramble With Me. > Feed The Plants. 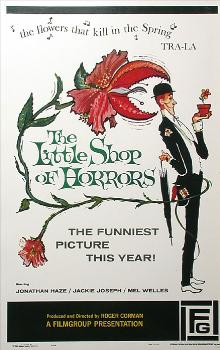 For a while I grew carnivorous plants. It’s funny to me that they’re sometimes described as violating the rules of nature when really a plant that eats animals is quite natural. Once we shuffle off our mortal coil we’ll become fertilizer. The expression “pushing up daisies” has it wrong. We’re really feeding the daisies, but that’s another story. Carnivorous plants just take a more active role in the process when they trap and digest prey.

Even from my earliest days I also loved weird monster movies so I was thrilled when I first discovered Little Shop Of Horrors. And, appropriately enough, I started with the original Roger Corman classic and a few years later was able to see the musical version directed by Frank Oz in the theaters. And that might make you ask, which do I think is better? Honestly I can’t say. I think they both have their strengths and weaknesses, and while the original was hastily thrown together—the legend is someone bet Roger Corman he couldn’t shoot an entire film in twenty-four hours and Little Shop was the result—it still has some great moments. I’d argue its greatest strength is its subtlety even though it hardly seems subtle, but, really, compared to the musical, it is. And there are enough differences between the two films that comparing them is like comparing apples and pineapples. The 1986 film would also be popular enough to inspire a Saturday morning cartoon that turned Seymour and Audrey into schoolchildren, the plant into a rapper, and for the sake of mercy I’m going to stop there. It had a cute opening theme song and that’s about it.

The most obvious difference is the 1986 film is a musical while the 1960 film isn’t, although that’s kind of like pointing out that one is in color and one’s in black and white. The 1986 film is also not really a remake of the 1960 film but an adaptation of the stage musical by Alan Menken and Howard Ashman, a couple who also did a few notable things for Disney. The musical takes the bare bones of the plot and makes some major changes—most of which I think are improvements. Seymour is made an orphan which makes him more interesting and writes out his mother who, in the 1962 film, is completely superfluous. It also adds impact to Seymour’s murder of Mr. Mushnik—the closest thing to a father he’s ever had. In the original Mushnik survives in spite of knowing the plant’s secret. The musical ramps up the intensity of Audrey and Seymour’s romance and complicates it with Audrey’s relationship with Skid Row’s dentist.

In the 1960 film the dentist was named Dr. Phoebus Farb—a name I wish they’d kept for the musical instead of renaming him Orin Scrivello—and it’s questionable as to whether he’s a sadist or whether inflicting pain is just part of the job description. The musical makes his sadism unbelievably explicit and in the 1986 film he’s played with over-the-top brilliance by Steve Martin. The fact that his whole introductory sequence is one of the funniest things I’ve ever seen suggests that I’m not the nice guy people seem to think I am but a dangerous sociopath who should be locked away and subject to rigorous psychological testing, but that’s another story.

There are also smaller changes. The detectives investigating the series of mysterious disappearances in the 1960 film are dropped—they’re as superfluous as Seymour’s mother. A few things shouldn’t have been cut: Mr. Mushnik’s hilarious malapropisms unfortunately get lost in adapation. Dick Miller as a guy who eats flowers in the original is replaced with Christopher Guest in the 1986 film as a customer who just wants to buy some roses. This is a real wasted opportunity: Guest is a comic genius who doesn’t get a chance to say anything funny, and if Miller had appeared in the 1986 film it would have been a nice tribute to his status as king of cameos, as well as linking the two films. The 1960 also has a very young Jack Nicholson as Wilbur Force, a masochistic dental patient. Having already murdered the dentist Seymour is forced to drill Wilbur’s teeth, providing a great sight gag. The 1986 film replaces Wilbur with Arthur Denton, played by Bill Murray, who’s always brilliant. His screaming “I’m gonna get a candy bar!” is hilarious but since he’s operated on by Orin it’s not clear why he’s even there.

Oh yeah, Levi Stubbs as the voice of Audrey II is brilliant. The biggest weakness of the original is the plant just lacks personality.

In the original Seymour’s plant is a crossbreed of a butterwort and Venus flytrap which he names Audrey Jr. In the musical and 1986 film the plant is from outer space–a smarter move–and Seymour names it Audrey II.

The biggest plus of the adaptations is the trio of singers–Crystal, Ronette, and Chiffon–who provide backstory and commentary and are everything a chorus in a Greek tragedy should be. And Little Shop Of Horrors, as funny as it is, is a tragedy–or at least the 1960 film and stage musical are.

When I first saw the 1986 film I was disappointed that they’d changed the ending. I didn’t mind that they cut the final body count down from five to two–a robber, a drunk, and a prostitute from the original are eliminated–but instead of Seymour sacrificing his own life he electrocutes the plant and he and Audrey live happily ever after, escaping to the ideal someplace that’s green Audrey has fantasized about.

That was also not the ending director Frank Oz wanted. Home releases, starting with the DVD, include the original, significantly darker ending: the plant kills Audrey. Seymour, seeing no future for himself, steps into the plant’s mouth. What follows is an extended sequence of Audrey II’s multiplying and spreading across the world. The fact that I find this so funny suggests that I’m not the nice guy people seem to think I am but a dangerous sociopath who should be locked away and subject to rigorous psychological testing, but that’s another story.

This is taken from the stage version which ends with the rousing musical number “Don’t Feed The Plants”, and is, I think, an improvement on the 1960 film. In the original Seymour grabs a knife and dives into the plant’s mouth but the ending is so abrupt it’s not clear what happens afterward, although presumably Audrey Jr. is destroyed.

Studio executives and test audiences found Frank Oz’s elaborate–and extremely expensive–ending too dark so they ordered a new happier ending. And rewatching the 1986 film I think they got it right. Audrey’s death is damned depressing and even though Seymour is a murderer it’s hard not to root–er, feel for the guy. A major difference between stage and screen is a film can give us closeups, creating an emotional closeness to the characters. Films also don’t end with the cast coming out to take a bow.

The 1986 film really has the perfect ending: Crystal, Ronette, and Chiffon, dressed as bridesmaids and smiling knowingly, stroll past Seymour and Audrey’s garden where a tiny Audrey II looks up and smiles. It’s a clever and subtle way of saying evil can never entirely be rooted out. Both endings are below so you can judge for yourself.

Because of my lifelong fascination with carnivorous plants I also like it that the plant survives. And since that I’m about to be locked up and subjected to rigorous psychological testing I’ll just leave you with this: which ending do you think is better?

And a bonus: Little Shop! Word!