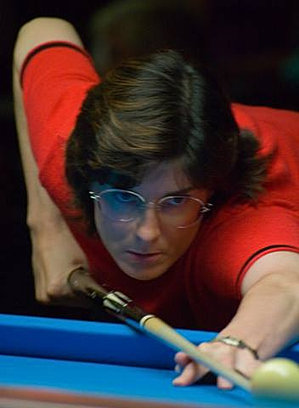 Snooker is the hardest of all billiards games. I think. That’s been my experience anyway, having played many different billiards games except I’ve never tried that one with the weird bumpers. Snooker is extremely challenging not only because you have to hit the balls in a particular order–one of the fifteen red balls followed by any of the seven other colored balls. The red balls stay pocketed. The other balls get replaced until all the red balls have been pocketed. You then have to hit the colored balls in a specific order: yellow, green, brown, blue, pink, and finally black. Red balls are worth a point each and the other balls range from two to seven points. Confused yet? It’s not only extremely challenging–you can block your opponent behind a ball they’re not supposed to hit and when this happens they’re “snookered”–but there’s a lot of math involved.

One of the best snooker players in the world is Karen Corr, whose birthday is today. Corr began entering tournaments at the age of fifteen and the day after her twenty-first birthday won the Women’s World Snooker Championship, which would be an incredible feat at any age.

Since then she’s also made a name for herself in the United States–her nickname is “The Irish Invader” and I first heard of her when I saw her in nine-ball matches where she often excelled. If she didn’t win she at least made it to the finals and she was inducted into the BCA Hall of Fame in 2012.

And she still works hard at her game. As it says on her website, “The one crowning glory left for her to achieve is the World 9-ball Championship; she has been runner-up 6 times.”

I can’t imagine what it’s like to come that close that many times but I believe she’ll achieve that goal. She’s an amazingly skilled player and her success in snooker means she must be pretty good at math.