End Of The Season.

Freethinkers Anonymous > Submitted For Your Approval. > End Of The Season.

Every year for the holidays I make my wife eggs Benedict with a recipe for hollandaise sauce that I call culinary nitroglycerin because it’s so unstable. The stages between not quite ready, perfect, and starting to break down could be measured in nanoseconds.

You know how some ideas sound great in your head and really goofy once they hit the page? At least I assume it happens to all of us. Please tell me I’m not the only one. Anyway that’s what happened with “Members of The Algonquin Club Sign Your Beach House Guestbook”. Well, sometimes when life gives you lemons you just have to make hollandaise.

I peregrinated to this delightful bungalow poised like a petit-four on the gulf’s contour to escape Hollywood’s ravages. Having completed a marathon script for “Pickled & Canned”, a vignette for an illustrious but aging luminary and his latest paramour I felt a longing for a more secluded coast. Imagine my delight when during my forenoon disembogue I glanced through the pane to spy two sylphlike beings. Languorous on the alabaster silica they were clad in polygons of violet and indigo taffeta that wouldn’t suffice to enrobe a baseball. I was mildly triste to find they had decamped by the time I began my perambulation along the alabaster littoral, but mirages of them swam before my eyes before my midday rest.

Gideon Tilney was flying a heroic mission over France when his wife called to him from the deck. “Come in out of that sun before you burn!” Slowly he pulled himself up from his beach chair. He’d allowed her to slather him with protective lotion before he went out. That and his wide-brimmed hat and the beach umbrella should have been enough, but he was never in a mood to argue.

As he trudged to the stairs leading up a sharp sting to his right foot made him yelp; he looked down. A crab, the same tan color as the sand, had grabbed his small toe. He kicked upward. The crab sailed and thudded against one of the pilings of the deck. It fell to the sand and was still. Gideon picked it up. Its black eyes were still bright but the legs hung limply.

“What are you doing down there? I told you to come inside!” his wife shouted.

She grimaced. “Well don’t bring it in the house.”

He scooped out a small hole and lowered the crab into it, then pushed the mound of sand in to fill it. Before climbing the stairs he picked up a small bleached clam shell.

Gideon’s wife was in the kitchen when he entered. “What kept you?” He still had the shell clutched in his hand. “That’s not that crab is it?”

“No,” he mumbled. He left it on the bookshelf and went to have lunch.

That afternoon while his wife napped he found a marker. He returned to the hole where he’d left the crab and with the seashell made a small memorial. The simple Latin epitaph he wrote on the shell seemed fitting.

The sun only reddens your skin,

Spring breakers make too much din.

The fish rots from the head,

Grains of sand get into your bed.

The wind blows from every side,

Jellyfish come in with the tide.

The nicest shells are just out of reach.

Life. It is a beach. 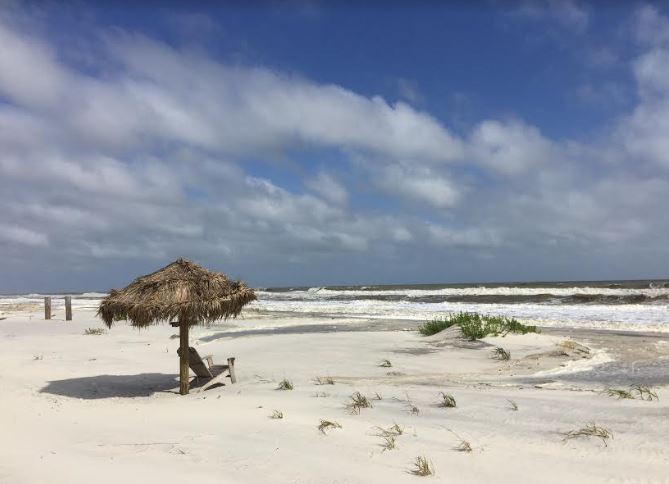