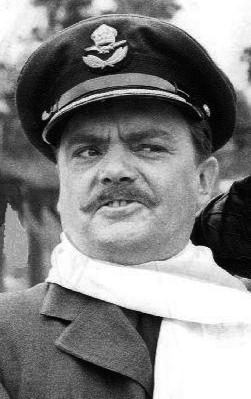 The life of a character actor seems like it would be hard but also rewarding. If you can accept the uncertainty and frustration, if you can accept rarely, if ever, being recognized, if you truly believe the saying that there are no small parts, or at least that having a part is its own reward, and if you love acting then being a character actor must be a pretty amazing job. Some character actors get around a lot–they get to travel from role to role, covering a wide range.

I thought about that when I heard about the passing of Bernard Fox, an actor who brought a big personality to small roles on the big screen and some big roles on small screens. Most remembrances refer to his recurring role of Dr. Bombay on Bewitched. He also had a recurring role as Colonel Crittendon on Hogan’s Heroes.

I was never much of a fan of either of those shows–I had no idea he had roles on them–but I remember him from two episodes of The Andy Griffith Show I first saw as a kid and which immediately became my favorites. I think I’ve always been an Anglophile but when the character Malcom Merriweather rolled into Mayberry he gave me an early impression of what British people were like. Okay, he was mostly a stereotype, but in his first episode he takes a job as Andy’s valet. Decades before Downton Abbey he gave a glimpse of what life downstairs, and upstairs, might be like as he tried to treat Sheriff Taylor like an English lord.

Yeah, it was pretty cheesy, and so was his return visit a year later when he steps up to assist Aunt Bea, but Fox was so charming he made it almost believable.

And what made the stories even more memorable to me is that Merriweather always arrived by bicycle, a freewheeling traveler seeing the United States and making money by picking up odd jobs in small towns–not unlike the job of a character actor.

It was an idea that made an impression on me too. I never did it but I always thought it would be a fun way to see the world–and get to know people, to go around taking up odd jobs. I sometimes rode a Greyhound bus between Nashville and Evansville and for some reason the bus took a lot of back roads, passing through the edges of small towns–what was normally a two hour trip by car took more than four hours by bus because of its strange route. And there were times I remembered Malcolm Merriweather, even though he was a fictional character whose travels were decades earlier, and I didn’t have a bicycle. Still I was sometimes tempted to step off in the middle of a small town and see if I could get a small job–and maybe move across the country that way.

Bernard Fox is also fondly remembered for his role in 1999‘s The Mummy as British RAF pilot Captain Winston Havlock, stranded and bored in Cairo, wishing for one more chance to fly, one more big adventure–also like any dedicated character actor, always in search of that next role, that next adventure, always moving to some new part of the world.