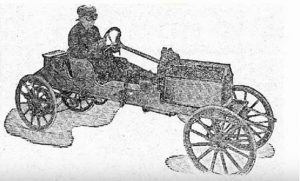 As soon as I started driving it was inevitable that I’d have an automobile accident. Well, maybe not inevitable, but highly likely. I think it is possible to drive and never be involved in an automobile accident but statistically the odds of it never happening are the same as being attacked by a shark, hit by lightning, and winning the lottery all on the same day. Since I got my license fairly late in life—at the age of thirty-six to be exact, something which, around here, is about as unusual as being attacked by a shark, hit by lightning, and winning the lottery all on the same day—I managed to avoid being in an accident while I was behind the wheel as a teenager, unlike all my friends who, within a year of getting their licenses when they were sixteen, all had at least one accident, especially my friend Martin who was pretty much an existential threat whenever he was operating a vehicle. Martin managed to total one car less than a month after he got his license and then had seven or eight minor bumps and dents over the next year, mostly as a result of driving over sidewalks. Martin had a strange belief that he could drive on anything that was concrete—sidewalks, patios, porches. Actually I’m not sure if this is something he really believed or if he just wasn’t paying attention. Once when I was riding with him he said, “You know, I don’t know how I manage to get into so many accidents.” I looked over and he had his hands behind his head and his eyes closed and was steering with his knees. He was also speeding because no matter where Martin was going he was in a hurry to get there. Normally I don’t think anyone should exceed the legal speed limit but in Martin’s case everyone was better off if he sped so he’d spend as little time as possible getting where he was going.

That’s when I said, “You can let me off here, I’ll walk the rest of the way home.” And then a few minutes later a nice cop pulled over and picked me up for walking along the interstate, but that’s another story.

With that experience behind me you’d think I’d be an extremely careful and considerate driver, and I am most of the time, but of course all it takes is being a bonehead one time.

I really should have clarified at the beginning that I wasn’t just involved in an accident. I caused it. And I would have mentioned that but I was in a hurry to get on with the story, so bear with me while I back up a bit since I was backing up at the time. I in a hurry to get home even though I really didn’t need to be, and backing out of a parking space. And in my defense I was being extremely careful to check behind me to make sure I didn’t back into anyone—so careful, in fact, that I didn’t realize until I heard the sound that I was scraping the side of the car directly to my left.

Luckily the owners of that vehicle happened to be walking across the parking lot at that very moment because I really couldn’t live with the guilt of leaving the scene of the crime and there are half a dozen places around that parking lot and if they hadn’t shown up I’d be walking into every one and yelling, “Hey, does anybody around here drive a big gray SUV sort of thing?”

That was my plan, anyway, since I was completely  flustered, flummoxed, and discombobulated.

And they were very nice about it and listened patiently while I gave them my name, license, phone number, mother’s maiden name, first pet’s name, the street where I grew up, how I met my wife, a coupon for a free burrito, my favorite color, and then proceeded to demonstrate that I wasn’t intoxicated by walking a straight line then taking a piece of chalk and playing hopscotch and wondered aloud about the phrase “pure as the driven snow” because snow that cars have driven through is always filthy. By that time I’m pretty sure they did think I was on something and I would have understood completely if they’d quietly backed away and forgotten about the whole incident.

In fact I did think they’d forgotten the whole thing because that was more than two months ago, but relatively speaking that’s a pretty short time. An accident can happen in seconds but dealing with the aftereffects takes a lot longer, and I’m pretty sure the insurance company will make sure I remember it for the rest of my life. Even if I never have another accident I’ll still have to pay a higher rate so each bill might as well have HEY, REMEMBER WHAT YOU DID? stamped on it in big red letters.

There have been predictions that someday accidents will be eliminated, or at least dramatically lessened, because we’ll have self-driving cars, removing all human error. I’m a little skeptical but it is still possible that in the future, maybe even in the very near future, we’ll have much safer vehicles. I really look forward to that and I’m eager to get there, but not in too much of a hurry, and I hope the people who design self-driving cars have their eyes open and aren’t steering with their knees.