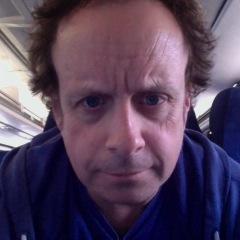 I have a theory about comedy troupes and other groups of comedians that there’s always one, and that person may not be the most popular member or the one audiences like best, who the others in the group look up to, the one who really makes the others laugh. It’s a pretty shaky theory and really I think in any group that holds together for a long time there’s got to be a lot of mutual respect, but when the members of The Kids In The Hall are interviewed four of them always have praise for Kevin McDonald, whose birthday is today. And the funny thing is he’s jokingly referred to himself as the one that audiences call “The Kid In The Hall we don’t like”.

I’m not trying to sow any enmity here even if I could by focusing on him, but the other members have described him as a natural comedic talent, and at least one of them has said they think McDonald wasn’t born but grown in a laboratory by some mad scientist trying to create the perfect comedian. Actually I think it’s the other way around: I think McDonald is the mad scientist who cooked up The Kids In The Hall, which is fitting since the others have said he’s also the nicest member of the group and the one who’s held them all together.

Last winter Kevin McDonald was in Nashville, not far from where I live, and offering a comedy class. Unfortunately it was right in the middle of a major snowstorm when we got several inches—or, for him, being a Canadian, a “light dusting”. I was stuck at home, and missing the chance to even meet him is something I still regret. If he ever comes back I don’t care what the weather is doing—I will find a way to get to him because, hey, I like the guy.