Freethinkers Anonymous > Submitted For Your Approval. > Good And Scary. 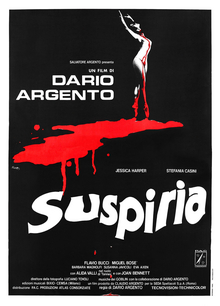 A few years ago I wrote about how the trailer for the film Suspiria gave me nightmares for a good chunk of my childhood, how it didn’t just give me nightmares but gave shape to something I was convinced lived in the attic behind my closet. I’m revisiting it because I finally watched Suspiria. Earlier I said that I’d seen some other Dario Argento films and, while he’s a renowned horror director, I’ve seen episodes of Spongebob Squarepants that were scarier. Not that I want to put down Argento’s work. He’s an excellent director and very good at creating a mood and, interestingly, children seem to be a running theme in his work. The women in Suspiria are all adults but he originally wanted to cast girls between the ages of eleven and fourteen. The film’s violence and subject matter prevented this, but the handles on all the doors in the film are deliberately raised so the young women have to reach up, like children.

Still at the end of Suspiria I had a little feeling of “Is that it?” It’s not the film’s fault. The nightmares I had as a child were so terrifying I had just built Suspiria up in my mind into something it could never be. And that got me thinking about my love-hate relationship with horror films. Before and during the Suspiria period, which, I think, lasted from around the ages of six to eleven, I did my best to stay away from anything remotely scary. A commercial for the original Psycho being shown on the UHF station would send me running from the room. Sure, it was the shrieking violins more than Norman Bates, but still I loved Godzilla and Gamera and other Japanese monster movies, and Star Trek and other science fiction, as long as it wasn’t billed as horror, and I loved The Twilight Zone. I also had a fascination with ghost stories. It’s kind of a weird mix. Or is it? Giant reptiles, aliens, and eeriness I could handle. Murderers and a lot of blood being spilled, even in black and white—that was something that could keep me up at night.

Suspiria’s spell started to break when we got cable TV and, funny enough, Nickelodeon, which used to run short films between shows. An animated version of The Tell-Tale Heart, narrated by James Mason, fascinated me. It still gives me chills, but the fact that it was a scary cartoon gave me the idea that horror could also be fun. Around the same time I agreed to watch Poltergeist with a friend in my neighborhood. It was a scary movie but one I could walk away from. I never thought our house was in any danger of being possessed. Then one evening I watched The Raven, on the UHF station in the time slot for horror films, but the scariest thing about it was how much fun Vincent Price and Peter Lorre obviously had. That was it. I still stayed away from Halloween and Friday The 13th, but I was hooked on classic horror films. This may also have had something to do with my family history and Roger Corman’s A Bucket Of Blood, but that’s another story. I watched every old horror film I could find, from the original Dracula up to Night Of The Living Dead. In high school I even directed a short film about two kids being chased by zombies.

I learned that being scared could be fun, although I still had limits. One night sitting up alone I decided to watch Angel Heart. And then stayed awake until noon.

I’ve come to appreciate horror as a genre, especially when it’s mixed with horror. Evil Dead 2 and Shaun Of The Dead are among my favorite movies. Is Shaun Of The Dead horror or comedy? Well if you’ve ever watched Black Books seeing Dylan Moran get torn to shreds is pretty funny. And sometimes I’ll take my horror straight. John Carpenter’s The Thing unnerves me but I still love it.

And I still have limits. Last October I decided to watch the original Texas Chainsaw Massacre. In his memoir Nerd Do Well Simon Pegg talks about how he almost got pressured into watching it as a teen but he pretended he had to go home to get out of it. I did the same thing. He adds that as an adult he still has trouble watching it. As for me, well, I almost didn’t make it past the DVD main menu. And then, about twenty minutes in, before anything really violent had happened, I stopped. I had a pretty good idea there was going to be a massacre and that chainsaws would be involved and I’m still not sure I want to go along with that.

We all have limits. We all draw the line somewhere. We all have things that attract us but also repel us. What scares you?