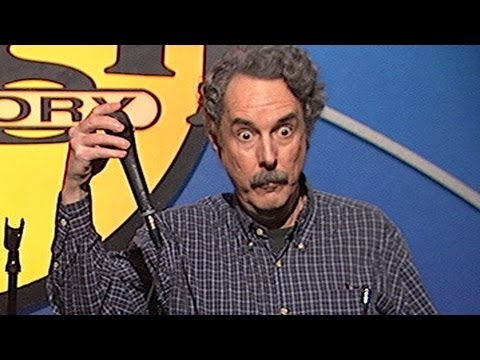 There were a lot of funny people on Dr. Katz, Professional Therapist. I was already familiar with some while the show introduced me to others who were so funny I couldn’t wait to tell  jokes the next day at work until my boss would have to interrupt and ask about the earnings reports, but that’s another story. One of those wonderful discoveries was Ron Lynch, whose birthday is today. And my boss was glad that repeating a Ron Lynch joke is nearly impossible, unless, of course, you’re Ron Lynch. Years later I was lucky enough to start reading Ann Koplow’s blog, and while she’s even luckier to have worked with Lynch I feel lucky to have learned more about him through her.

I’m going to use a term I’m not all that fond of, but bear with me. Normally when someone is described as a “comedians’ comedian”—or a “musicians’ musician” or, well, you can fill in the profession, especially if the profession is mason—it’s a backhanded compliment that means someone so brilliant at what they do their work is only truly appreciated by other professionals. Sometimes it’s really an insult, both to the performer who’s being subtly criticized for not being “accessible” and to regular audiences who are faulted for not getting it.

Some people might call Ron Lynch a “comedians’ comedian” because of the way he plays around, interrupts himself, and breaks down a joke—and, for that matter, because he frequently doesn’t rely on the traditional setup : punchline, but Ron Lynch is like a magician who shows you how a trick is done and still manages to dazzle you with it. Or, to put it another way, fool me once, that’s hilarious, Ron Lynch, fool me twice, you did it again, Ron Lynch, fool me three times, it could only be Ron Lynch.