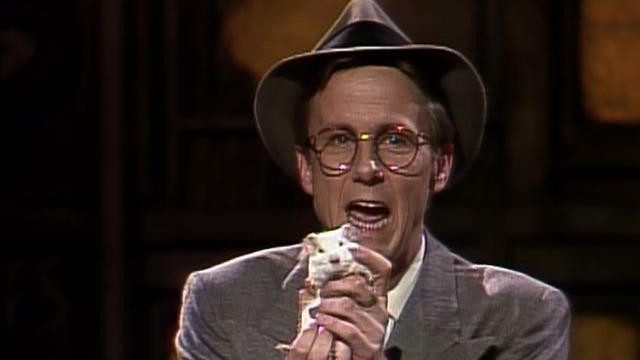 In one episode of the TV show Night Court Judge Harry Stone meets a younger version of himself: a kid in a three-piece suit and a fedora who does magic tricks. Faced with this window into his past the judge moans, “Oh God, I was a geek!” And I said, what? No! Judge Harry Stone is cool!

For some of us who grew up with Night Court’s original run from early 1984 to May of 1993—because it was strategically placed right after Cheers I watched it from the very beginning—the show is part of, and even represents, a cultural change that happened during that time. The 1970’s preached non-conformity but it was really the ‘80’s that embraced it. Night Court started off more or less grounded in reality but its throwaway lines and then whole plots became increasingly surreal. Night Court made it hip to be square, or polygonal, and at its heart its stabilizing influence was the barely stable Judge Harry Stone, prankster, magician, and Mel Torme fan, played by the prankster, magician, and Mel Torme fan Harry Anderson.

While his Judge Stone character was squeaky clean it tickled me when Anderson showed up occasionally on Cheers as the grifter Harry The Hat, and when he hosted Saturday Night Live and stuffed a guinea pig in his mouth and shot magician Doug Henning in the back. I liked it that he had a dark side, and that it was just as weird as his light side.

I know he did more TV after Night Court finished, but it wasn’t until I heard about his untimely passing that I thought about how much Night Court and Harry Anderson warped my adolescent mind. In 2006 he moved to Asheville, North Carolina. I have cousins there who take pride in that city being known for its weirdness and openness and being labelled a “cesspool of sin”. It seems fitting that Harry Anderson, who helped some of us embrace our own weirdness, would live in a place that embraced it right back.