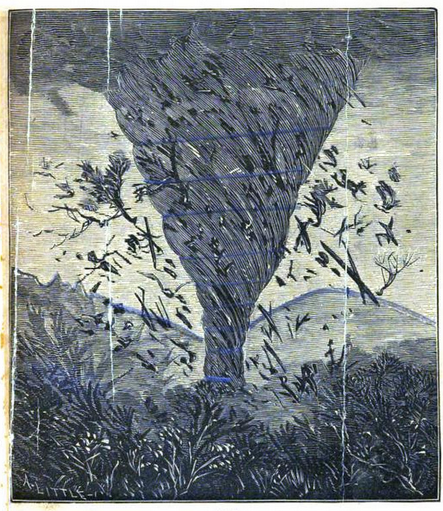 When I was in sixth grade I became obsessed with tornadoes. I read everything I could find which, at the time, wasn’t much because the school library was pretty limited. What sparked this obsession was the annual watching of the tornado awareness film which always happened in late spring. It was the same film I’d seen every year since kindergarten so I don’t know what sparked such an intense interest that particular year. I always thought tornadoes were kind of cool and I thought it would be interesting to see one, but before sixth grade the feeling passed quickly. Maybe the information just hit critical mass with me, having been subjected to the same bass baritone narrator intoning about, “Tornadoes: nature’s tidal wave. They wreak untold devastation, destruction, and demolition. For the next twenty minutes we will begin to understand all that scientists don’t understand about these unpredictable natural phenomena that strike every year with frightening regularity…” The film covered how tornadoes were caused by rotating columns of air when cold and warm fronts collided, and what to do if a tornado was coming, which was mainly get away from windows, preferably into a basement or cellar, put your head down, and wait it out. There was even a shot of a group of kids just like us huddling in a line with their heads down, and what always stuck with me was that there was one kid who turned around and looked up. And I thought, yep, that’d be me, even though in an enclosed space safe from a tornado there wouldn’t be anything to see except the wall and ceiling. Still, I wanted to look. After the film we would have a practice drill. We’d be taken out into the hall because for some reason our teachers thought the ideal place to be during a tornado would be a long corridor with doors to the outside at either end. I never questioned this but I never understood it either. The restrooms, which were completely enclosed and had heavy tile communal sinks that looked like they were designed by Antonio Gaudi would have been so much safer. In the hall we had to squat down and put our heads between our knees, and when the teachers turned away I’d look. Sometimes I’d be close enough to the doors I could see the trees outside, branches moving slowly in the breeze.
One afternoon during my sixth grade tornado obsession I was outside and saw a few leaves blow around in a circle, one of those strange miniature vortices you sometimes see twirling leaves or trash and I got really excited. The next day I told my friends I’d seen a dust devil, one of those small tornadoes described in the film we’d watched. And this started a long argument about whether a dust devil could be made of leaves or if it had to be dust. Not that it mattered: what I’d seen was just a light wind curling around itself.
All this came to me the other night when a cold front came through and for a few pensive hours the area to the north of us was under a tornado watch and I realized it was nearly twenty years ago that a tornado hit downtown Nashville. The date was April 16th, 1998, to be precise. I was at work that day, it was the afternoon and there were reports of storms. A group of us were gathered at an office window and we could see the clouds begin to rotate, curling downward. At the time a tornado had never hit downtown Nashville. I’ve never confirmed this but it seemed all of us thought it was impossible, that the tall buildings acted as barriers to any a tornado ever forming. There was a sense among all of us, though, as we watched the clouds gather into a downward funnel, that something very terrible was happening. Someone said, “I think we’d better get away from the windows.”
It was terrible but short-lived. A few hours later when my wife and I drove home together there was an eerie calmness. I was glad it had passed. I had seen enough.