The Kids Will Be All Right.

Freethinkers Anonymous > The Weekly Essay > The Kids Will Be All Right. 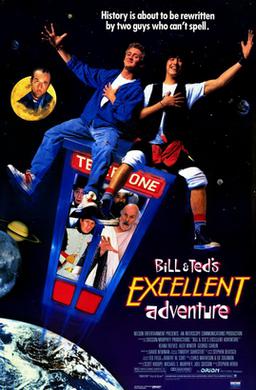 When I say Bill & Ted’s Excellent Adventure is one of the best films of the ‘80’s and even deserves a place among the best films of all time I’m not kidding. Sure, it got blasted by critics when it first came out, but so did Led Zeppelin’s debut album which is now considered a classic, and, sure, it’s got its weak spots, but so does Led Zeppelin’s debut album and for that matter so do a lot of great works of art. It may not be Citizen Kane but it would be ridiculous if it were because Citizen Kane had already been made almost half a century earlier. And Bill & Ted’s Excellent Adventure has lasted, meeting one of the main criteria for a film to be considered classic. Mark Twain also described a classic as “a book which people praise but don’t read,” and the film is so dependent on sight gags and actors’ performances that if it were made into a book that book would be terrible and no one should read it.

Granted this is just my opinion and while most opinions should be taken with at least a grain of salt it’s up to you to decide just how big that grain should be, and I’ll sprinkle in some additional thoughts. At least three times a day I ask myself, what makes you think that? And the first time I saw Bill & Ted’s Excellent Adventure I said, wow, I know we’re going to see a lot more of Alex Winters, and maybe that other guy too. Keep in mind, though, that this was before Keanu Reeves was famous and was even before I was asked to play Keanu Reeves in a school talent show, back when I had more hair and less waist, but that’s another story. What I’m saying is that with opinions you should always season to taste, and a voice is telling me I’ve already hammered this point so hard it’s embedded in the wood and I should move on.

The critics who hated Bill & Ted’s Excellent Adventure were also, in my opinion, a bunch of old ugly dudes who missed that Bill and Ted aren’t as stupid as they seem–and maybe even smarter than they realize, like when Bill lets it slip he has “a slight Oedipal complex”, and while it’s lasted, I think it’s greatest impact was for people of a certain age at a certain time, which is ironic for a movie about time travel, but then films about the future have a lousy track record of actually predicting the future with the possible exception of Fritz Lang’s Metropolis. And what made it great was not that the way it spoke to a rising generation but its message to the older generation: trust the kids and they will turn out all right. With the right guidance, in fact, they can be extraordinary, and can even make a better world where miniature golf scores are way down and bowling scores are way up. In retrospect it seems almost too perfect that Bill and Ted’s mentor from the future, Rufus, is played by George Carlin who, two decades earlier, embraced the youth culture that was being rejected even by some of his own generation.

While that other well-known ’80’s time travel film, Back To The Future, also contained the warning that the future and even the present aren’t fixed, it looked to the past. Bill & Ted’s Excellent Adventure looked to the future, keeping it largely unknowable, but placing the greatest burden not on the past but the present. Bill & Ted also fully embraced something Back To The Future only touched on: when you’ve got a time machine you’ve literally got all the time in the world, as the disappearance of Ted’s father’s keys in the first reel has a most excellent payoff in the final one.

As much as I loved the first film I had low expectations a few years later when I went to the theater to see Bill & Ted’s Bogus Journey. It felt like the first film was so complete in itself that, in spite of the success, there couldn’t be a sequel. In the theater, though, I did get a brief reminder of what the first film meant to me. There was a group of kids in the front row and somehow before the movie started I got to talking with them found out it was the tenth birthday of one of them. I gave him a pair of sunglasses with glow in the dark frames. “Thanks!” he said. “That was really excellent of you,” his mother told me. I just said, “Party on, dudes,” and took a seat in the back row where the Bogus Journey, in spite of the Ingmar Bergman references and great use of the Vasquez Rocks, was most heinous and non-triumphant.

And now there’s a third film in the works, and I wonder what this future holds. I don’t ask why because it’s Hollywood, Jake, and sequels and franchises have been part of the game at least as far back as the 1930’s with setups like The Aldrich Family which spanned a total of eleven films.

What I’m wondering now is, have they gotten better? Have we? And by “we” I mean those of us who are like Bill and Ted: guys who’ve already started out pretty high up on the ladder and get an extra boost. The future, so far anyway, hasn’t turned out to be so excellent for many people. Those of us who saw ourselves in Bill and Ted had a chance to make the world better and we largely failed. And one of the biggest flaws of the first two is that women, whose historic roles have largely been sidelined or even ignored, get the same treatment from Bill and Ted–even the historic babes. Sure, Joan Of Arc takes over a Jazzercize class, but even the woman who manages their band turns out to be Rufus in disguise. Bill and Ted have been to the past and future and to Heaven and Hell and even defeated Death, and now is their chance to see history as much more complicated than the contributions of as many dudes, mostly white dudes, as can be stuffed into a phone booth. George Carlin is sadly gone but that means we are now Rufus, and we have a responsibility to extend the help we offer far beyond the Circle K parking lot. And some of us old ugly dudes need to be reminded that while we can still party on the first and most important thing we can do in both the present and future is to be excellent to each other.