Freethinkers Anonymous > Not Non-Fiction > Another Way. 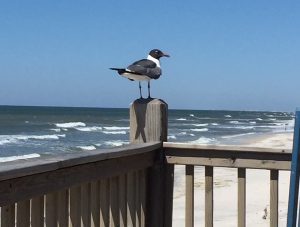 There are two ways to respond to rejection: try again or give up. Or find another way. There are some famous books that were rejected dozens of times before finally being published, countless others that we’ll never know about because their authors gave up, and then there are those who found another way, publishing on their own. Well, this story has been rejected multiple times, and while I could keep trying I think instead I’m going to take the other way.

“If you feed them they’ll just keep coming back!” the man next door yelled.
“Ignore him,” muttered Linda. Carl ignored her and the man next door and threw another handful of bagel pieces to the seagulls hovering around the deck. Then he grabbed another and started ripping it up. They were the bagels they’d bought at the Sea’N’Sand when they arrived on the island, some national brand that turned out to be too light and bready.
“I don’t want to sound prejudiced,” Ruth had said that morning when they tried one, “but the goyim just can’t make a good bagel.”
The phrase struck Linda as odd; the only other time she’d heard Ruth use it was earlier on this same trip. They’d flown to Mobile and met their daughter Annabel at the airport, and this was their first chance to meet Carl whom she’d been dating for six months. In the car they rented to drive to the island he entertained them with his original Broadway cast recordings of Wicked, Fun Home, and Ethel Merman in Gypsy.
“I don’t mean to sound prejudiced,” Ruth said when they’d stopped and Carl insisted on pumping and paying for the gas, “but are you sure he’s not gay?”
“Oh yeah,” said Annabel and gave a throaty laugh.
“Really?” Ruth pressed. “So, tell us, does he–”
“That’s enough!” shouted Linda and Ruth and Annabel giggled quietly the rest of the trip until they passed a restaurant with oyster shells piled in its parking lot. Carl said, “I’m really looking forward to some fresh oysters” and Ruth and Annabel exploded with laughter.
There were at least a dozen seagulls hovering over their deck now. Linda could see their white-rimmed eyes and the red tips of their beaks. Most had black heads but one near her had a mottled gray head. Linda wouldn’t have guessed birds could hover and yet here they were, their bodies almost motionless while their wings beat the air.
The man next door turned and went back into his house. Linda had watched him and a woman she assumed was his wife, a frail-looking figure who wore a headscarf and spent hours stretched out on the beach chair on their deck. It was late April and yet Linda watched him drape three or four blankets over her. She’d never seen him before; in fact she couldn’t remember having any neighbors before. She and Ruth had first come to the island a decade earlier for their honeymoon, and came back to the same beach house, a tan-colored three-bedroom place decorated with classical frescoes inside called “Dun Roman”, for a week every year for their anniversary. Ruth had fallen in love with the place immediately; Linda wasn’t so sure. It was always windy on the beach, and at first she didn’t like seeing the gas drilling rigs out in the bay, but now they were like old friends, and she looked forward to nightfall when their amber lights glowed.
After the bagels were gone Linda dragged the garbage can across the sand up to the road for the next morning’s pickup. It was still early evening, or late afternoon, but the sun was setting, the sky was starting to turn pink and orange. She stopped to look at it and saw the man next doorwith his garbage can. She gave him a polite smile.
“Ahoy!” he said then walked over to her. He was bald with a cottony fringe of hair around his ears and wore glasses over his pale blue eyes. “Sorry I yelled earlier. These days I’m just a little too conscious of seagull poop.” He put out his hand. “I’m Michael Jackson. Not the Michael Jackson, though.”
His handshake was gentle. Linda smiled. “You’re not the craft beer and microbrew writer then?”
His eyes widened and he grinned. “Most people don’t make that connection. So, neighbor, you’re here with family?”
“Yes, my daughter Annabel, her boyfriend Carl, and my wife Ruth.” She was used to varying shades of hostility, especially in Alabama, when she said “my wife”, especially from older people, but he only smiled.
“Good, good. First time?”
“No, we’ve come here every April for ten years now, for our anniversary.”
“Congratulations!” he beamed. “My wife and I always come here in the fall but six months from now, well, not sure where things will be.” Then abruptly he checked his watch. “Well, it was nice meeting you, but it’s my wife’s cocktail hour and I have to tend to her.” He gave a quick salute and strode back to his house.
Inside Ruth asked, “So what’s the guy next door like?”
“I don’t want to sound prejudiced,” said Linda, and went to the kitchen to make a Bloody Mary.