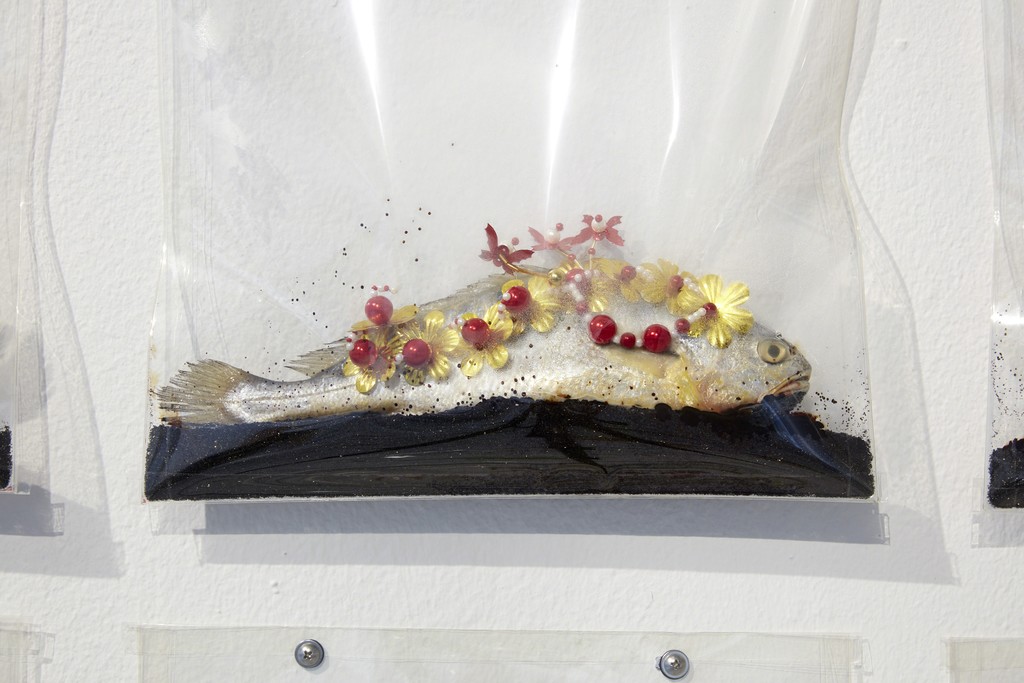 Have you ever wondered why Harpo Marx never talked? There’s a story a friend told me, although I’ve never heard it anywhere else, that when the Marx Brothers were just getting their start in show business their first manager took their money and lost it at the racetrack. Harpo said, “I hope you go down in flames!” The next day the manager’s house burned and the other brothers decided it would be for the best if Harpo kept his mouth shut.

Years later when Groucho, Chico, and Harpo got together one last time to make A Night In Casablanca the studio wanted the silent partner to yell one word so they could put “Harpo speaks!” in the ad copy, but Harpo refused and they dropped the scene where he was supposed to yell “Fire!”

That’s what I thought about when I read that the opening of an exhibit by the South Korean artist Lee Bul at London’s Hayward Gallery was delayed because the art burst into flames.

The work called Majestic Splendour consists of fish—real fish—covered with sequins and plastic beads and because the smell of rotting fish made visitors sick at previous exhibitions the gallery added potassium permanganate to the fish.

Apparently potassium permanganate can also burst into flames when added to rotting fish.

I know this is the sort of thing that prompts a lot of cheap jokes about modern art but making art and putting out there to the public, trying to make a statement, is a risky thing. It takes guts and sometimes those guts burst into flames and I’m not sure where I’m going with that, but I like Lee Bul’s work. One of her others, a silver zeppelin called Willing To Be Vulnerable is oddly eerie, suspended over a silver floor that blurrily reflects it. I like the fish too. Suspended in mylar bags and decorated with beads they speak to me of the environment, the contrast between the rapidly rotting fish and the staying power of plastic. They’re also beautiful to me, and I never really noticed before how much a fish’s eye looks like a bead. Even the fire seems like a statement: heat can turn fish into food and plastic into toxic fumes.

So be careful about making cheap jokes about avant garde art because you just might go up in flames and, by the way, did you know Harpo Marx was a painter and an art collector?