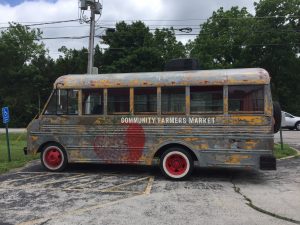 There was a young woman standing at the bus stop. She had a sequined scarf around her neck and a white blouse and a batik skirt that looked like it was made of crepe paper, and on her arms she wore these rainbow knitted sleeves, all of which seemed like it would be miserable in 85-degree weather–regardless of whether it’s Celsius or Fahrenheit–but still I thought, hey, whatever makes you comfortable. She looked, in short, like a typical bus rider because she didn’t look like anybody else and the one thing I’ve noticed in decades of bus-riding is that there is no stereotypical bus rider. If I see a bus rider who looks kind of like someone I saw yesterday it’s because they’re the same person. Anyway I had my earbuds in which meant I was giving off the universal “Leave me alone” signal which is fine when I’m alone at a bus stop but makes me feel uncomfortable when someone else is around. No matter who else is at the bus stop I always have this strong desire to strike up a conversation but I have no idea how. A few times I’ve thought about saying, “Hey, I write this eclectic blog where I sometimes tell stories about riding the bus. What’s your story?” Yet I feel like that would impolite and while I’m on the subject I have this theory about politeness that it’s the way we deal with strangers, and I even once had a broad sweeping cultural idea that the English, who are renowned for their reserve, are so polite because they haven’t been invaded since 1066 so everyone is a stranger, whereas the allegedly rude French never meet a stranger because they’ve invaded or just treated as a geographic throughway since before they had the gall to call themselves Gauls, but that’s another story.
The bus was running late and I finally pulled the earbuds out of my ears and tried to strike up a conversation by saying, “The bus should be here any second now,” which, in terms of lousy opening lines, is second only to “Hot enough for ya?”
And the young woman snapped, “I know!” A bit rudely, really. I felt like a schmuck, but then I feel like that a lot so I’m no stranger to it.