Freethinkers Anonymous > Submitted For Your Approval. > Sagan’s Sense Of Snow.

Continuing the black and white photo challenge here’s a very special one. This was Sagan, named for Carl. His registered name was GCH Rockstar Phoenix Written In The Stars, AX, MXJ, XF. He was a Grand Champion and an agility dog and according to the American Kennel Club and Dalmatian Club of America standard was a typical Dalmatian, for whatever that’s worth. He was, as it says, “polite but reserved with strangers.” He’d wag his tail when meeting new people but kept his feet on the ground. With those he knew and loved, though, he was a sixty-pound lapdog.

Dalmatians were bred to be coach dogs, to trot alongside the horses on country roads and then be companions and guardians by night, very loyal and protective which is why they eventually became the traditional firehouse dog.

Here’s the original version of his picture. 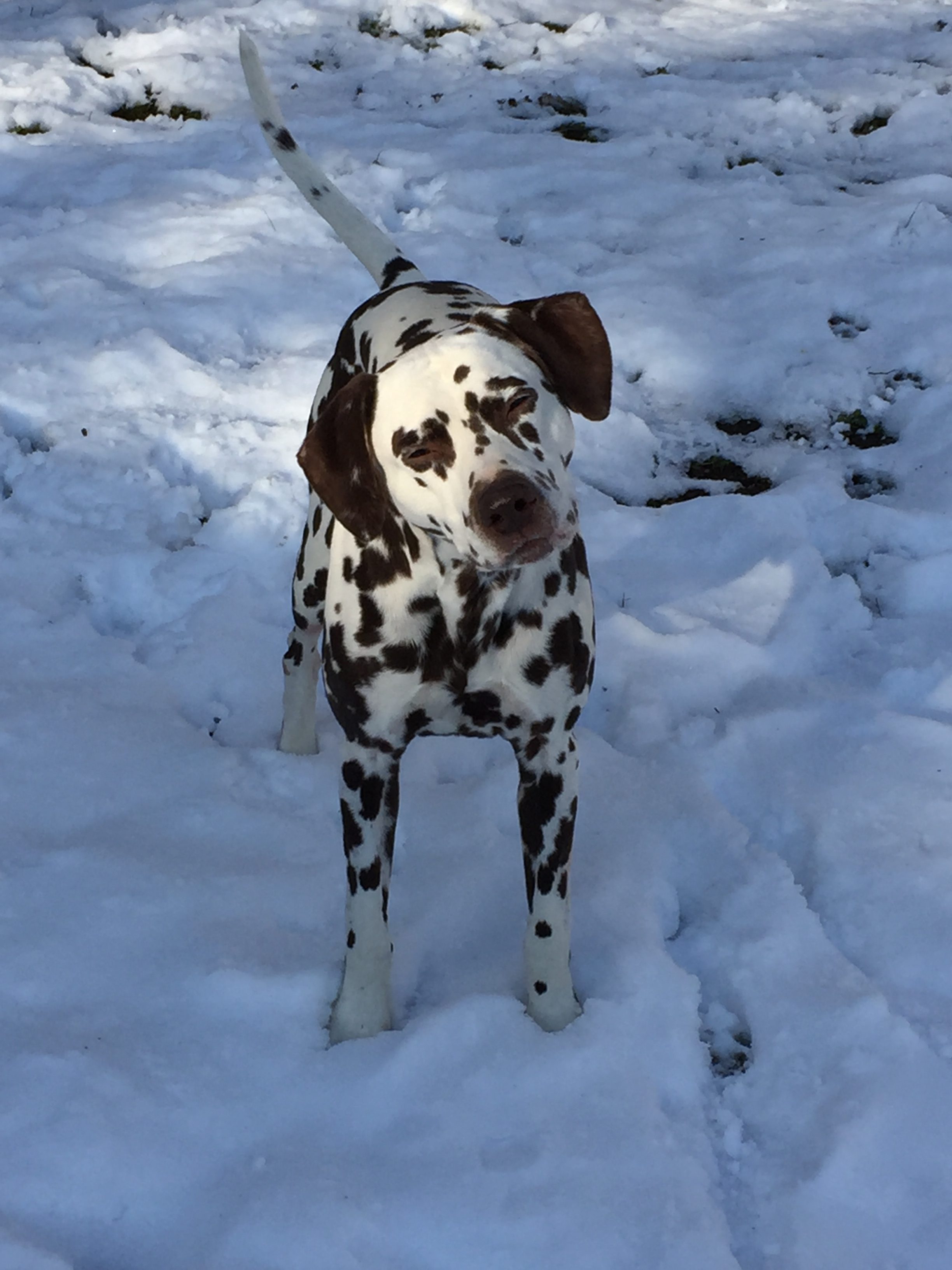 Sagan was, as you can see, a liver-spotted Dalmatian. He wasn’t our first liver Dalmatian, but his spots always got a lot of attention. At a dog show a woman said to my wife, “I’ve never seen a brown Dalmatian before.” My wife said, “We call it ‘liver’.” The woman then looked down at Sagan and said, “Hello, Liver.” At another show a little girl saw him and said, “He looks like a Dalmatian but he’s brown!” My wife then explained that while black-spotted Dalmatians are most common you’ll also the liver-spotted variety in the show ring. Outside the show ring Dalmatians sometimes also have spots that are brindle, blue, lemon, and there’s even a long-haired variety. In the novel 101 Dalmatians Perdita is a liver dog and helps nurse Mrs. Pongo’s fifteen puppies, which came from Dodie Smith’s real experience, and something the Disney adaptations left out, but that’s another story.

When I was going through chemotherapy Sagan and I would take naps together. As soon as he knew we were headed to bed he’d jump up and down and spin, then he’d run to the bed and spin more and wag his tail. Then, because Sagan could go from sixty to zero in 1.8 seconds, as soon as I lay down he’d curl up next to me and fall asleep. If I moved even slightly he’d let out a long sad moan. That always made me laugh.

Less than two years later we’d have to say goodbye to Sagan. It’s the hardest thing we do. They give us so much love, companionship, and laughter, and in the end what we give them in return is to be with them. It doesn’t ever feel like that’s enough. We still have one of Sagan’s children and one of his grandchildren, and I love all of our dogs equally, and I miss all the ones we’ve loved who are gone, including Sagan. He was smart, sweet, and funny in a way that was anything but typical.