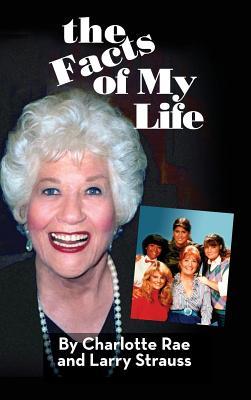 Maybe you have, or had, an older family member, an aunt, say, who was nice to you but whom you never thought that much about because you only saw her at family gatherings. She’d take an interest in you, give you a piece of cake and some milk, and ask about what you were up to, what you liked. And you never thought to ask her anything about herself and you only discovered later in your own life that she had a rich history, that she was intelligent and interesting and there were so many things you wish you could have asked her.

If you know that feeling then you’ll understand when I say that’s kind of how I feel when I heard about the passing of Charlotte Rae. Yes, she never took any interest in me personally—we never crossed paths, and I know it’s weird to feel that way about someone I really only knew as a television character, but I was seven when Diff’rent Strokes debuted and once a week lost myself in the goings on of the Drummond family. And even though I thought it was the kids I related to there was something about Rae’s Mrs. Garrett that was warm and familiar; there were women like her in my family, although none of them lived with us.

It’s a surprise to me now that she only spent one season on Diff’rent Strokes. I immersed myself in The Facts Of Life too–yeah, I was a kid who watched too much television–but in my memory it’s as though she lived in both the Drummond house and Eastland School simultaneously. The younger cast members may technically have been the focus of both shows but she was a vital part of both.

And it never occurred to me at the time that she had a rich history and an interesting life outside of those shows. Her memoir, The Facts Of My Life, co-written with her younger son Larry Strauss, traces her history from the pogroms of the early 20th century that drove her family out of Russia and to the United States, through her career in cabaret and television–including a stint on Car 54, Where Are You? as Al Lewis’s wife Sylvia Schnauser. The Facts Of My Life opens, though, in 1971 while Rae was working on Sesame Street as Molly The Mail Lady. Her older son Andy had been put in Bellevue Hospital for psychiatric treatment following a violent outburst just before his sixteenth birthday. It was a tough time for her and she says,

I had to be back on Sesame Street in the morning delivering mail to Oscar The Grouch and Big Bird and those bright-eyed children who would sit on my lap. They were so adorable and precious and I was in such pain. I couldn’t sleep and I didn’t think I could do another scene with those beautiful children. I tried to talk myself into it: Come on, Charlotte. You’re an actress. You can love them and admire them and admire and marvel at them.

That was really only the latest in a series of difficulties and things would get a lot harder for her.

Something else I didn’t even think about until now is that Rae was also a singer, and in an odd coincidence this morning on my way to work I was shuffling through songs on my phone and “My Conviction” from the Hair soundtrack popped up. I’ve listened to that whole album countless times and yet it never occurred to me that it’s Charlotte Rae singing, that, in addition to her talents for acting and comedy, she had some serious pipes too.