Roses Are Red, Buses Are…

Freethinkers Anonymous > Adventures In Busing. > Roses Are Red, Buses Are…

The Nashville MTA has been undergoing some major changes lately, mostly cosmetic, although that’s still a pretty major undertaking. A new coat of paint still costs money. They’ve renovated the downtown bus depot–and even getting a bus depot back in 2008 was a big thing. Before that the main place to catch buses downtown was a row of shelters stretched out over a couple of blocks and if it rained you might be stuck outside. Anyway the Nashville MTA doesn’t even call itself the Nashville MTA anymore. It’s now We Go which seems kind of presumptuous because lots of people go.

The biggest change though is a set of new buses that are purple. Why purple? I don’t know, but I like it. I also wonder how long they’ll stay purple. Most Nashville buses, as in every city, are basically giant moving billboards. Some are completely covered with a single ad–even the windows. Most of them are advertising a couple of local law firms also known for their cheesy commercials and I’m not including any pictures of those because they’re not paying me to put their ad here, but that’s another story.

The inside of the buses are clean and shiny and new, which isn’t surprising. What is surprising are the seats. They’ve replaced the traditional burgundy upholstery with slick blue plastic. 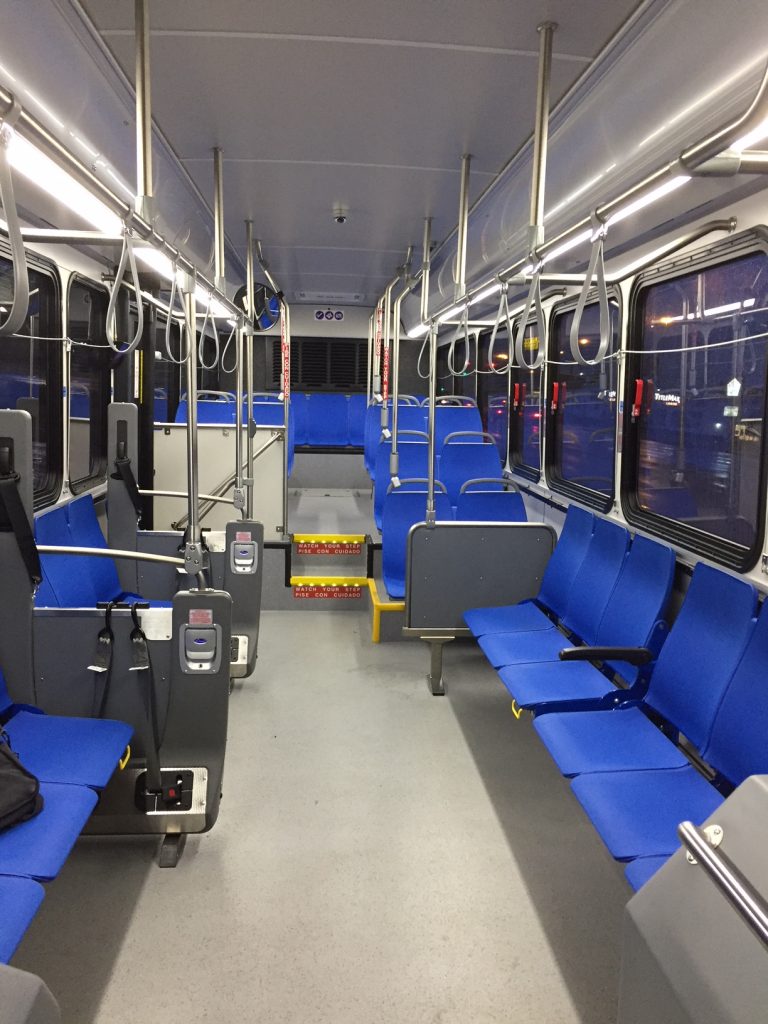 I’m no style critic but don’t purple and blue clash? Why not make the seats purple too, or maybe a nice contrasting orange? In more practical terms, though, I understand the plastic is less likely to hide stains of questionable provenance than the old carpet, but it also means my ass slides forward about five inches every time the bus judders to a stop. They’ve made all these changes and never thought seat belts might be a good idea.