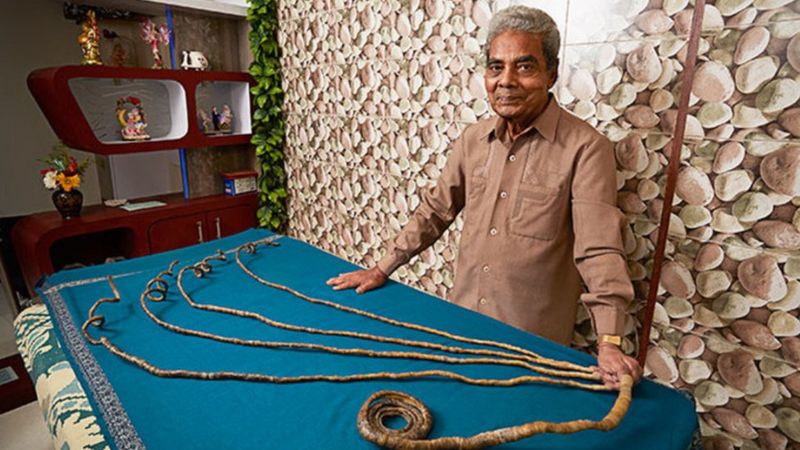 When I was a kid I was terrible about biting my nails. Maybe it had something to do with anxiety although I can’t remember what I had to be anxious about and now that I’m an adult and in a constant state of panic I never chew my nails. I do remember the endorphin rush that came when I ripped off a hangnail so hard with my teeth I drew blood around the edge of the cuticle and I should probably stop thinking about it or I’m liable to start again. What I also remember is that I wanted to stop chewing my nails. I wanted to let my nails grow long just to see how long they’d get. This may have been inspired by a woman I saw in a department store who had freakishly long talons that made it hard for her to use a cash register, but she was clearly proud of them and had painted them a nice shiny aubergine.

My real inspiration, though, was Shridhar Chillal, listed in the Guinness Book Of World Records for having the world’s longest fingernails. His level of dedication is staggering: he kept growing his fingernails for sixty-six years and they eventually reached a length of 29 feet, ten inches. He recently decided to cut them after, among other things, not getting a good night’s sleep for years. The other things are probably best left to the imagination. Or not imagined at all.

He was inspired by a teacher who accused him of never being committed to anything and I doubt that’s what his teacher had in mind but, hey, good for him. He’s really an inspiration to all of us: find one thing and stick with it.

Actually he also worked as a photographer and had a family which I guess proves it’s possible to multitask.

Amazingly I remember there were a few challengers, but when it came to holding the record Chillal always nailed it. Let’s give him a hand.