Freethinkers Anonymous > Adventures In Busing. > Getting Around.

They sprang up like 13-year cicadas, all over the place, on corners, under trees, and all over sidewalks. At least they were quieter than cicadas, although they could be at least as annoying, zipping up behind me as I was walking somewhere or left lying on their side blocking the path. I was checking one out–I mean considering taking one for a spin, when an older couple came up to me and asked, “How do they work?” I was tempted to be a smartass and say, “Well, you straddle it with your legs and put your feet on the pedals…” but that would be rude, so I said, “It says you have to download an app…” The woman laughed and said, sarcastically, “Well of course! You can’t do anything these days without an app,” and I was glad she was the one who got to be a smartass because she made a much better point. The Ofo bikes seemed like a fun and easy way to get around, but I’m slightly paranoid when it comes to downloading weird apps, especially ones that are theoretically free but could track where I’m going and when. Not that where I’m going is any big secret, and I do see the advantages. I’ve never forgotten the time I got lost biking around St. Petersburg, Florida, which is easy to do because the houses there all look alike, but that’s another story. 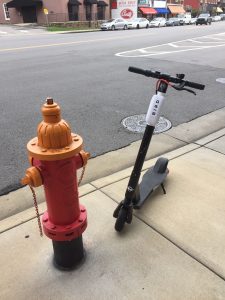 Anyway the bikes disappeared as suddenly as 13-year cicadas. It turns out Ofo is scaling back its operations in North America thanks to a series of problems including theft and vandalism, which is why we can’t have nice things or bikes that clutter the sidewalks. They were replaced by Bird scooters which are cooler and because they’re motorized offer a faster way to get around, and they promise that it’s “Only $1 to get started” which I’m even more paranoid about because I’m pretty sure you still have to download an app and now it’s one you have to pay for. And they’ve been controversial because they clutter the sidewalks, gathering in groups. I was standing at a bus stop when I guy sped up on one–I thought I was going to have to get out of his way since quite a few people on them have forced me off the sidewalk as they zip by–and then he got off. So I talked to him a little bit about them. We talked about how the rules are that they’re supposed to only be used on the street and riders are always supposed to wear a helmet. And we agreed that the two things we’ve never seen are someone riding a scooter on the street and someone riding a scooter wearing a helmet. I can’t say whether these new transportation options are really cutting down on traffic which is supposed to be their big advantage–they don’t seem to be–but they’ve definitely prompted a rise in sarcasm.