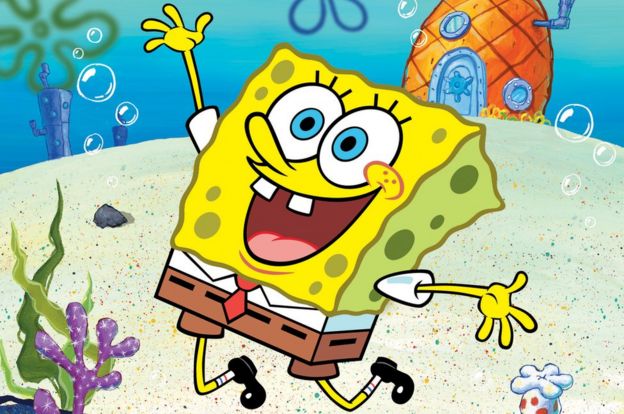 When I was a kid I wanted to be a marine biologist. My family would go on summer vacation in Florida and each day we’d go to the beach where I’d swim and collect various creatures. Then back at the house I’d draw whatever I found, or I’d draw other things—I did a lot of drawing too, and making up stories. I felt strangely divided between wanting to be a scientist and wanting to be an artist, and although I didn’t pursue a career in science I did realize that art and science aren’t that far apart—aren’t different, really. There’s a creative aspect to all scientific research, and art provides a way to share what’s learned, and both are a way of understanding the world.

Because of that I like to think of Stephen Hillenburg as a kindred spirit. We weren’t that far apart in age so I couldn’t say he was a childhood hero—although it’s a sobering thought that a child born the year Spongebob Squarepants debuted could be nineteen years old now—but we shared that duality. Hillenburg started out teaching marine biology but left it to pursue a career in art—in animation, specifically, and even though I think teachers are really important I think he had an equally important impact by giving us a world that was pure silliness.

He was also very private, and in a world where too many of our heroes or even kindred spirits turn out to have feet of clay—where we learn so much about people we admire it can be hard to keep admiring them—that’s okay. For all that I feel a connection to him personally I’d rather think I know him through the characters he created, and while, like all classic animated characters, they always sprang back to their original selves, the denizens of Bikini Bottom had personalities and emotions as deep as Rock Bottom. Consider this: Patrick Star is continually joyful and full of life and once, when asked how stupid he is, replied, “It varies.” And yet he also worked hard to impress his parents—at least until they turned out not to be his parents, and gave up the brain coral that turned him into a genius, deciding that ignorance really is bliss. Squidward, perpetually grumpy, got so fed up with Spongebob and Patrick he moved to Tentacle Acres, but realized that living with people just like him didn’t really make him happy. Sandy is a squirrel who lives underwater, the only girl in the main group, and while she occasionally gets homesick for Texas, she realized home is really where you’re surrounded by those who care about you. Mr. Krabs is a perpetual cheapskate who nevertheless is willing to spend money on his daughter and, hey, as bosses go I’ve had worse. Even Plankton, the show’s villain, has a soft side—he has a computer wife named Karen (which was also the name of Hillenburg’s wife)—and is able to let go of his quest for the Krabby Patty formula once in a while and just have fun. And then there’s Spongebob himself: he finds joy in everything, from blowing bubbles and catching jellyfish to working at a griddle and scrubbing toilets.

And there’s a wonderfully weird group of other recurring characters, from Mrs. Puffs, Spongebob’s boating instructor, to Mermaid Man and Barnacle Boy. They’re a diverse enough group that almost anyone could find a kindred spirit in there, although I did once take an online quiz, “Which Spongebob character are you?” and was surprised to get the answer “Gary”, but that’s another story.

Spongebob has been with us and will be with us for a very long time, but it feels like Stephen Hillenburg was taken too soon.