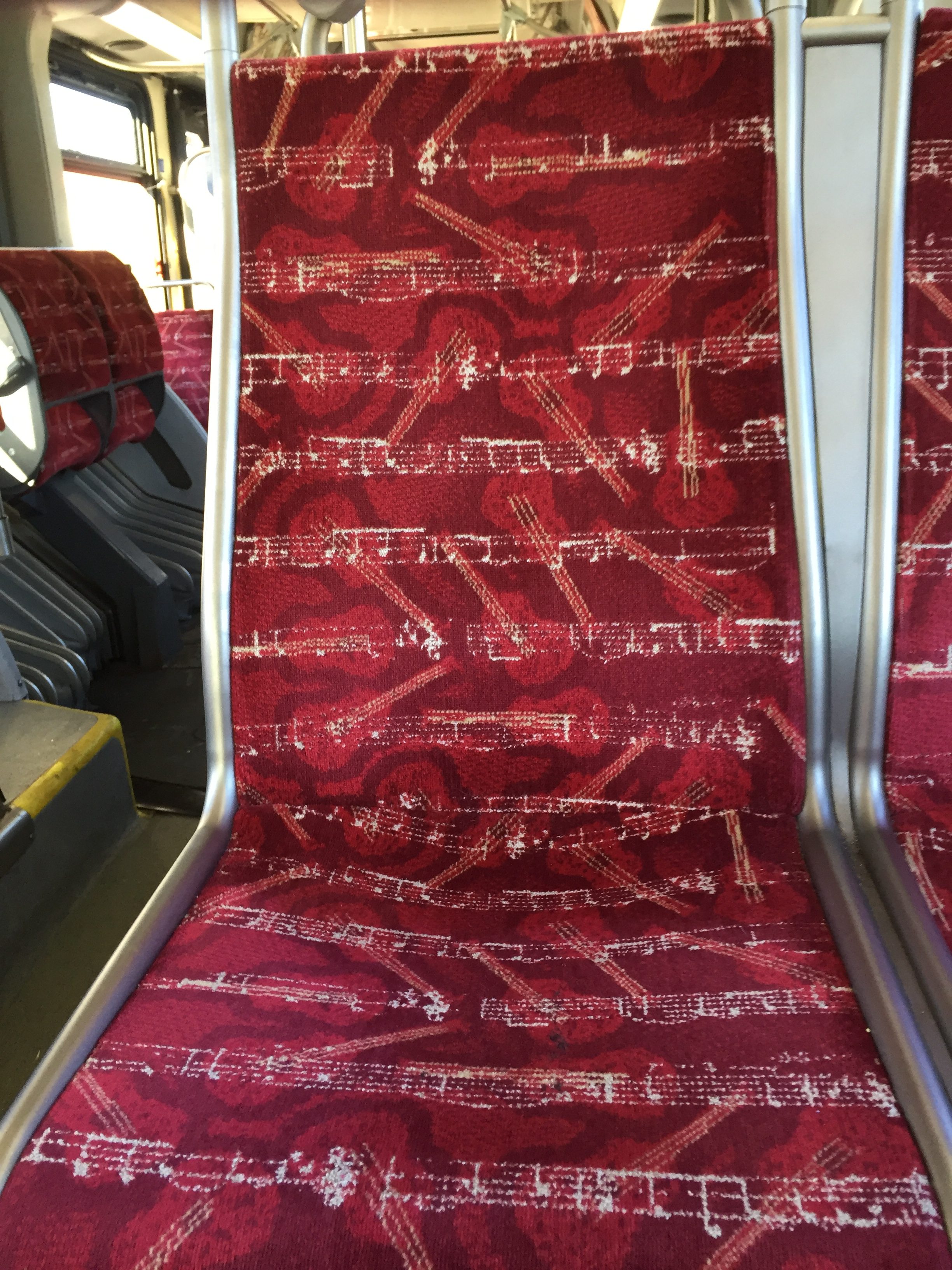 An article over at CityLab looks at seat design for public transit around the world, taking in the good, the bad, and–in the case of the Los Angeles bus lines–the psychedelic designs. Many use moquette, which is the peculiar fabric so popular on planes, trains, buses, and and occasionally hotel pillows, although as I’ve mentioned previously Nashville’s new WeGo buses have plain plastic seats that may be easy to clean but are also slippery and with their complete absence of any design are just begging for a permanent marker makeover, although I haven’t seen any redesigned just yet. And there are the moquette-covered seats with a musical design, pictured at left, which is an interesting idea–Nashville being known as Music City–but the printing job was so badly botched no one can name that tune.
The article’s author, Feargus O’Sullivan, gets a bit snarky–a Warsaw, Poland bus seat design evokes “some biblical rain of blood”, Boston’s old MBTA trains have a seat design that “looks like a diagram of a serial killers brain synapses”, and seats on Dublin’s Luas light rail have a design that suggests the city’s “monuments apparently sinking Titanic-like into a sea of fire”–and those are some of the nicer descriptions. He acknowledges the difficulty seat designers face, though:
Seat-cover fabric designers have to create something that looks pleasant for—or at least doesn’t actively offend—the eyes of hundreds of thousands of people. That’s an all-but-impossible task. It’s somewhat cheering that fabric intended to please as many people as possible ends up being not bland, but often wildly eccentric. If nothing else, the interiors of these public vehicles are certainly way more interesting than the interior of almost any private car.
Almost any private car. I think we’ve all had that friend–or maybe I’m just lucky–who eats a lot of fast food and has never cleaned the interior of his 1976 Dodge Dart so when you hitch a ride with him your feet rest on a decade-old detritus of drink cups and burger boxes.
And distinctive seat design–whether creative or horrifying–does serve the function of drawing attention to public transit, which it desperately needs. With increasing traffic congestion public transportation is increasingly important. As a guy I used to work with would say, “People really should use public transit. It’s better for the environment, better for the city, and I’d have an easier time finding a parking space.” And I’d look at him and think about suggesting he should get rid of all those burger boxes on his floorboard, but that’s another story. It just has to be the right kind of attention. An important thing about seat design, O’Sullivan says, is it “shouldnt be so bright and busy that it turns stomachs”. The reason for that is practical as well as aesthetic. A lot of riders of public transit–kids, pregnant women, people too drunk to drive–are already likely to be sick, and a dazzling design could just serve as camouflage. With some designs I’d rather stand and admire them than worry about what I might sit in.