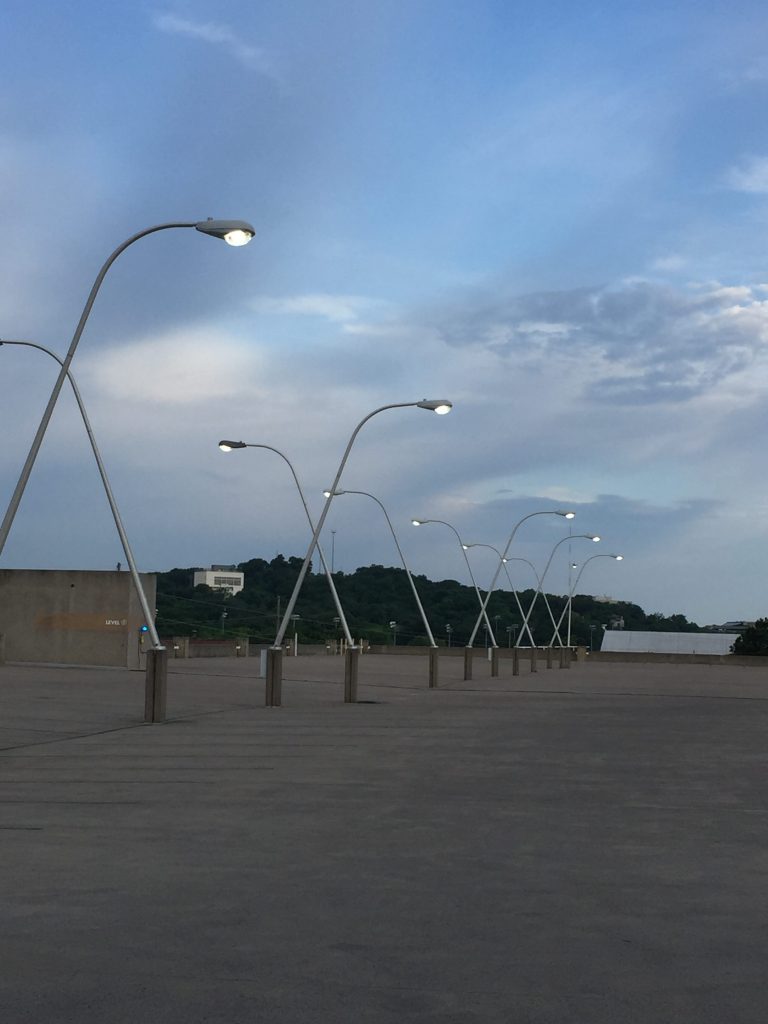 So I was walking into work and saw the streetlights go out. It was a strange thing, and not just because it’s the summer and the days are getting longer which means the sun is pretty well up most days when I’m on my way into work. And unlike sunrise and sunset which are slow events the streetlights going out, or coming on, is a sudden change. Blink, look away, or just not look at the right time and you’ll miss it. It reminded me of when I was six or seven and had a strange obsession with streetlights. When I was riding in the back of the car at night I’d lean up against the window and look up at them as they went by, and I felt like they were looking back at me like giant cyclopean eyes—mostly amber, but also the silvery white ones, brighter than the moon. We lived on a cul-de-sac and I’d stand under the street light and look up into it, fascinated by the black blotch in it where insects had crawled in and died, and I’d watch moths bounce around it and wonder if they’d ever break free. Or I could turn away from it and see how our house cast a sharp shadow. It was so easy to step from light into infinite darkness and back again. Even then, even in summer when I’d be out in the street with my friends, it was rare that I would see the lights come on. It was as though it were something I wasn’t meant to see. Our house was also on the edge of a hill, and from my window in the back I could look out at the cul-de-sac parallel to ours, or at the intersection at the bottom of the hill. On humid nights or when there was fog or a light rain there’d be a halo around the streetlights, as though they were growing brighter.

Once when I was staying with my grandparents they took me to visit some people who had a basketball court in their backyard. They had a high power lamp that hung over it that looked like a streetlamp, and I thought, oh, they must have taken one from the street and put it here. I didn’t think of them as having stolen it. Instead I just thought how interesting it was that a streetlamp could be pulled up and transplanted, like a tree. I wondered if my parents could take one and put it in our backyard. Maybe, I thought, the streetlamp on our street is lonely and it would like a friend.

Seeing the streetlights go out also brought back a more recent memory. I was sitting in a coffee shop one evening, next to the window. It was just on the cusp of darkness but the streetlights hadn’t come on yet. A guy parked next to the sidewalk and got out and started putting change in the parking meter. He was bald and skinny and in the half-light his silhouette looked like Nosferatu. While he was still putting change in the parking meter a woman walked up and started hitting him. It looked like she was really hitting him hard, too. I wondered if I should say something, but “Help! Some woman is beating up Nosferatu on the sidewalk!” just didn’t seem like it would get much response. And he was continuing to put money in the parking meter—maybe he was using pennies, or planning to park there for three or four days. He seemed oblivious to the pummeling. Then the streetlights came on and I looked away from the couple for just a moment. When I turned back Nosferatu and the woman were hugging and then they began to rock back and forth slowly, and I wondered, for a moment, if I should yell, “Help! Nosferatu and some woman are slow-dancing on the sidewalk!” but I couldn’t decide if that was a bad thing or not. The whole scene had been so strange, as though it were something I wasn’t meant to see.