This year marks the 50th anniversary of the Stonewall riots that for many mark the start of the modern LGBT rights movement. It also marks the 41st anniversary of the rainbow flag as a symbol of LGBT movement. It was designed by artist Gilbert Baker and flown at the San Francisco Gay Freedom Day Parade on June 25th, 1978. It supplanted the pink triangle as a symbol of gay rights, which reminds me of the time I started to go into a pub but then hesitated because there was a pink triangle in the window. It was off to the side, in the corner of a window, and so small I might have missed it, but I saw it anyway and thought it meant it was a gay pub then wondered why that would be a problem because I just wanted to get a pint like everyone else in there, so I went in and had a pint. And while I can’t say whether anyone in there was gay–there were men and women at the bar engaged in local talk but it seemed to be a place that welcomed everybody–I realized the pink triangle in the window was a Bass ale logo that had faded in the sun. Anyway to get back to the rainbow flag, ten years ago the radio program/podcast Studio 360 asked listeners to submit ideas to redesign the rainbow flag and asked fashion designer Isaac Mizrahi to judge. He picked this redesign of the United States flag with only seven stars:

The stars represented the only states that allowed same-sex marriage at the time: Massachusetts, Connecticut, Iowa, Maine, New Hampshire, New Jersey, and New York. Vermont would be added later that same year, other states would follow, and with the Supreme Court’s Obergefell decision in 2015 same-sex marriage became the law nationwide, so the flag that Mizrahi picked six years earlier effectively had fifty stars. The flag Mizrahi picked made a statement that was quickly outdated, and limited to the United States, but LGBT people are everywhere.

For what it’s worth the design I would have picked is this one, since I think it’s a truer representation of the human spectrum: 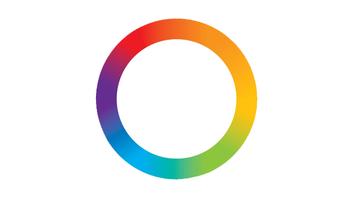 There have also been variations of the rainbow flag almost from the beginning. Originally the flag’s stripes were hot pink, red, orange, yellow, green, turquoise, indigo, and violet. Pink and turquoise were removed in 1979 and replaced with blue. Later there was a variation that included a black stripe as a memorial to AIDS victims, a tragedy that, like Stonewall, galvanized and propelled the LGBT rights movement.

I think the rainbow flag persists and has become so popular because it’s an inclusive symbol. A few years ago I was in a small town and went to a coffee shop and, as I was going in, I noticed a rainbow sticker. It was off to the side in the window and so small I might have missed it, but I didn’t hesitate to go in because I knew the coffee shop was a welcoming place.

Anyway I’ve noticed something interesting in the way the flag is often displayed. While it’s usually flown from a flagpole with its stripes oriented horizontally I’ve seen it more frequently hung in buildings and windows vertically. It’s a simple, and probably unintentional, redesign, one that puts the stripes side by side, so that all the colors are equal.