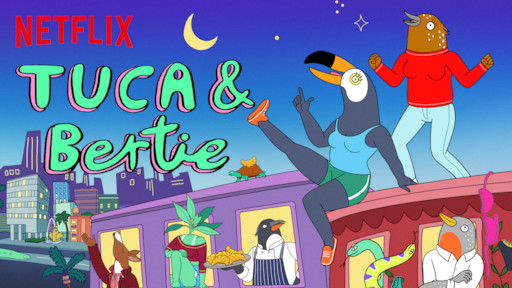 When I heard about Lisa Hanawalt’s new show Tuca And Bertie I was excited. Hanawalt’s a very funny artist and I really like her work, and she did most of the design for the characters and overall look of Bojack Horseman. Then I wondered…will it be anything like Bojack? After all Hanawalt is an exective producer of Bojack and Bojack’s creator Raphael Bob-Waksberg is an executive producer on Tuca And Bertie. And the answer is no, in spite of the cross-pollination between the two shows. Comparing them is like comparing apples and oranges—or maybe even like comparing apples and pineapples. Bojack inhabits an alternate reality that’s not too far off from the one we live in, but with anthropomorphic animals and the occasional animal-pun. One of my favorite aspects, which I’ve written about before, is the art references. Tuca And Bertie live in a very different universe—although Bertie does work for the publisher “Conde Nest”—where almost everything—including plants and buildings—is, if not anthropomorphic, then at least weirdly sentient and mobile. The jokes are subtler, the humor more conceptual. In one of the first episode’s funniest gags Tuca, who’s just moved out of the apartment she shares with Bertie, decides to visit her old friend. The style switches to a video game with Tuca jumping over a graphic rat on her way to Bertie’s apartment. Which is in the same building. Two floors down. If you want a comparison Tuca And Bertie could be sort of described as Broad City meets Adventure Time.

Among other things, as Hanawalt explained on a recent episode of the Bullseye podcast, whereas Bojack is tightly scripted the direction and writing of Tuca And Bertie is much looser. She tells the directors they can add scenes, cut scenes, and change styles if they want, and as much as she loves sitcoms she wanted to get away from the traditional sitcom structure.

Tuca and Bertie, played by Tiffany Haddish and Ali Wong, are very funny characters and very appealing, and the overall vibe of the show is upbeat, although with occasional sad touches. Tuca is loud and outgoing but with a vulnerable side, and Bertie is shy and quiet, but ambitious. It’s great to see her get a promotion but disappointing when she realizes what comes with it. That same episode also deals with sexual harassment both seriously and in a hilariously weird way.

Really though it’s the distinct artistic style—or rather styles—of Tuca And Bertie that to me makes it so fun to watch. It’s frenetic and weird, and I’ve had to pause and rewind several times during an episode to catch details I missed the first time around. It’s fun to see the funny, sometimes intense drawings from Hanawalt’s books transformed into an animated TV show. Hanawalt talks about how different the communal process of making a TV show is from drawing cartoons, and also how Tuca and Bertie represent different sides of herself. She’s multi-faceted, which is reflected in both the stories and the look of the show, but also reflects us–we’re all muti-faceted. We’re all different animals.