Death is a popular subject in art, and I can think of at least a couple of reasons why this is so. The act of creating a work of art, whether it will ultimately live on after the artist or not, might prompt the artist to contemplate the ephemerality of existence. If you create something it’s both the summation of who you are at that point in your life and it also becomes part of you going forward. Another possibility, and one that could overlap with the first, is that death is such a big subject, one that everyone living will have to contend with sooner or later, that it’s an easy way to lend weight a work of art, especially if it’s not that good, which is why so many poems I wrote as a teenager were about death, but that’s another story. In the case of graffiti most artists, I think, expect their work to only be around a short time, and that too can prompt contemplation of the ephemerality of all things.

This particular graffiti, placed on a wall below a parking lot and just off a busy street makes me contemplate much more than death, though. For one thing it reminds me of The Epic of Gilgamesh. At its end Gilgamesh tells the boatman Urshanabi to look at the city walls he built. Those walls will be Gilgamesh’s legacy but, having completed his journey and having accepted his own mortality he knows the walls too will eventually crumble until there’s nothing left.

It also reminds me of the Spreuer Bridge in Lucerne, Switzerland, which I went to when I was a teenager. Built around 1400 the bridge was spruced up between 1626 and 1635 with a series of paintings in which death comes for everyone. 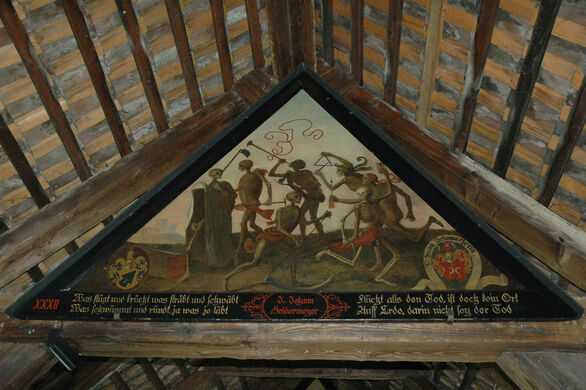 Death is sometimes described as a form of “crossing over”, going from one world to the next, so it seems especially fitting that reminders of death would decorate a bridge. Although now that I think about it decorating a parking lot with a reminder of death is pretty fitting too, since your mortal remains are going to be parked somewhere, even though they’ll eventually crumble until nothing’s left. Anyway I fortunately outgrew the bad teenage poetry phase, even while I was still a teenager, because the closer I get to death the more I’m reminded that there’s life to be lived.