There’s Something About Mercury.

Mercury, Venus, and Mars in Virgo. Picture made with the SkyView app.

I’ve only been able to see Mercury, a smudged disk, a few times. There are trees in my neighborhood and it sticks close to the horizon, and close to the sun, so it’s usually only visible at dawn or sunset. And that’s how the innermost planet earned its name. In mythology Mercury stuck close to, and sometimes tormented Apollo, but he was also elusive and a trickster. According to one legend Mercury, or Hermes as he was known to the Greeks, stole Apollo’s cattle and delivered them as a gift to Zeus, saying it was an offering to “the twelve gods of Olympos.”

“By my count there are only eleven gods of Olympos,” replied Zeus. “Who’s the twelfth?”

“At your service,” said Mercury.

He had a dark side too. Hera was jealous of Zeus’s lover Io and turned her into a cow, which I still think is unfair. She was always going after Zeus’s lovers when the problem was, you know, Zeus. And knowing that turning a young girl into a cow would do udderly nothing to stop Zeus Hera also set the thousand-eyed monster Argus to watch over Io, even though it would have made more sense to, you know, set the thousand-eyed monster to watch over Zeus. That still didn’t stop him; he just sent Hermes to take care of the problem, and Hermes gleefully went along because he liked the chaos and disruption . Hermes played his pan pipes for Argus until the monster fell asleep and closed all thousand of his eyes. Here’s a really cool sculpture of Mercury about to slay Argus by Bertel Thorvaldsen. 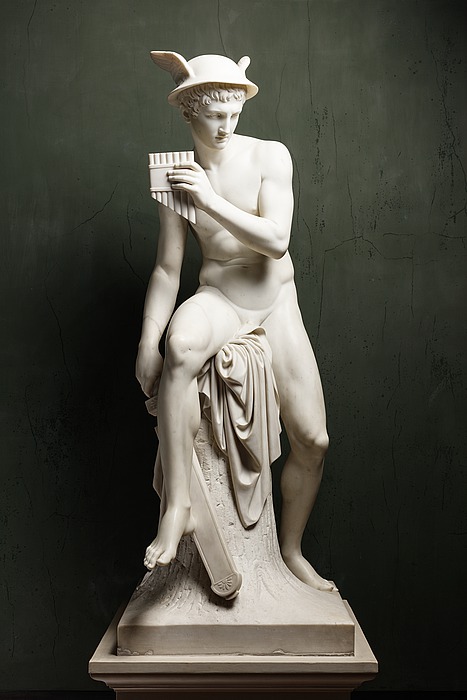 I love how he’s got his pipes in one hand and is slowly drawing out the sword with the other, careful not to wake the sleeper. Art and death go hand in hand, literally. It’s why I keep an eye out for Mercury.