Freethinkers Anonymous > Adventures In Busing. > Where Was Everybody? 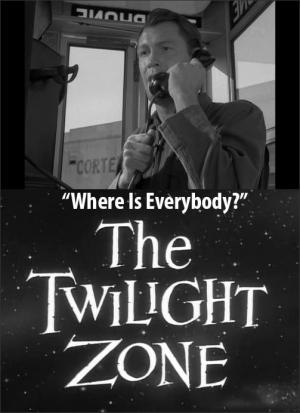 A coworker came in the other morning and said, “I can’t believe how fast I got here today. There was absolutely no traffic on the road. I hardly even saw any cars on my way in. Is something going on?”

I’d heard on the news earlier that a car on the interstate had burst into flames. Miraculously no one was hurt but the accident was bad enough that emergency crews had closed all lanes for a while and she had been lucky enough to time her commute just when they’d reopened.

“I’m so glad there’s a logical explanation,” she said. “It was so weird, like something out of The Twilight Zone.”

“It’s funny you should say that,” I said, feeling a fire spark in my brain. “The first episode of The Twilight Zone was called ‘Where Is Everybody?’ and is about an astronaut who returns to Earth and finds the whole place deserted.”

She chuckled and said, “That’s interesting.”

The fire in my head was building.

“It premiered in 1959 and starred Earl Holliman. You might remember Holliman from his role as the ship’s cook in Forbidden Planet.”

She chuckled and said, “Only you would know that,” not realizing this was fanning the flames.

“I’ve always wondered why a ship that’s capable of interstellar travel with a crew that spends most of its time in hibernation needs a cook, but I do love the scenes with Holliman and Robby The Robot.”

“Oh, you should!” I’m pretty sure my eyes were glowing at this point and I could feel smoke coming out of my ears. “It stars a young Leslie Nielsen. This was years before he did Airplane!”

And with that I had to run to the kitchen and run cold water over my head.

Sometimes I just shouldn’t be around people.